The Rev. John Mitchell Mason [1770-1829] was an Associate Reformed pastor who served for many years in New York City. The following anecdote was published in The Evangelical Guardian, vol. IV, no. 6 (November 1846): 285. The story is related on those pages by the editor of the magazine, as part of his account of travels in New York City that year.

On Sabbath evening before leaving the city, I paid a visit, in company wit 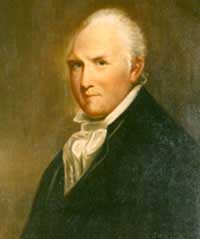 h Mr. McLaren, to old Katherine Ferguson, a colored woman who became a member of Dr. Mason’s Church about 40 years ago. She is a remarkable woman. The most of what she made by keeping a confectioner’s shop (enough to have placed her now in independent circumstances) she spent in feeding, clothing, and educating destitute colored children. She is warmly attached to the Associate Reformed Church, and remembers Dr. Mason, and the ‘days of old.’ with peculiar delight. Two young persons, members of Mr. McLaren’s congregation, were in her house, being there, as I understood, to read the Bible, and converse with her. This would not fail to make on a mind at all accustomed to sober reflection, a favorable impression as to their piety.—One object of my visit, was to obtain from her lips an account of an occurrence which I had sometimes heard related. Her statement was as follows:

“After Dr. Mason commenced preaching in Murray Street, some ‘gay ladies’ from Pearl Street, said to him: ‘Doctor it will not do for those colored people (Katherine and a male relative of her’s who had made a profession of religion) to sit at the same table with the white communicants.—They should be at a Table by themselves at the last.’ The Dr. simply replied, that he would think of it. When the day for the communion came round, and the people were about to take their seats at the Lord’s table, the Doctor came down from the pulpit, and taking the two colored persons by the hands, he said,’This is my brother, this is my sister. He that doeth the will of my Father which is in heaven, the same is my brother, and sister and mother. In Christ Jesus, there is neither Greek, nor Jew,—Barbarian, Scythian, bond nor free,’ and then led them forward to the table and set them down ‘first of all.’ “

This was the result of the Doctor’s reflection on the subject, and it settled the question forever.