Missed the Date by a Month!

The following tract was originally a message brought by the Rev. Francis A. Schaeffer on 12 November 1944. (Which means we’re a month late in posting this!) This particular tract is one of several early messages by Francis Schaeffer, all of which were published while he was the pastor of the First Bible Presbyterian Church of St. Louis, Missouri. That pastorate began in December of 1943 and ended late in 1948. Leaving that pulpit, he then moved his family to Switzerland to begin a ministry of church planting. Our copy of this tract is from among the papers of the Rev. Albert F. Moginot, who served for several years as Rev. Schaeffer’s . 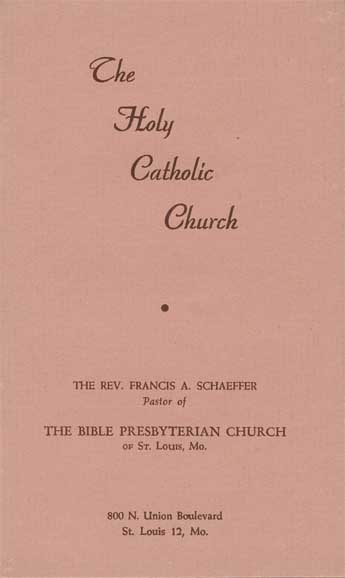 Inside the front cover of this tract there is the note that this message was originally preached in St. Louis on 12 November 1944. At that time Dr. Schaeffer had been the pastor of the St. Louis church for just less than one year. St. Louis is a city with a particularly large population of Roman Catholics. In fact, the city is second only to New Orleans in the observation of Mardi Gras. So in that setting it would not be surprising to find many in a Protestant congregation who were troubled by some of the words in the Apostles’ Creed. It is a common concern and misunderstanding, one that the young pastor sought to address. Going beyond that, the tract is also a brief apologetic for a biblical faith, over against the errors of Roman Catholicism. Rev. Schaeffer begins his message with the following statement:

Schaeffer then touches on the following points in examination of his topic:
• The Church Is One.
• Entrance into the Universal Church.
• The Bible.
• The Sacraments.
• Baptism.
• Confirmation.
• Penance.
• Mass.
• The Church Is Holy.
• Conclusion.

Rev. Schaeffer’s conclusion provides an excellent summary of his message:

We should repeat this portion of the Apostles’ Creed with heads held high and with the determination not to give up this name catholic, which is ours. We who are true believers are the holy Catholic Church. I am a Christian because I have put my faith in Jesus Christ and for no other reason. My friends, therefore, I am a member of the universal Church, the Church catholic.
. . . Let me say again that I do not hate or dislike the individual Romanist. I hate no man because of his creed any more than because of his race. There is no place for these things in the Christian heart. I also realize that there may be Christians in the Roman Catholic Church; but if there are, they have been saved through faith in Christ in spite of the errors of their Romanism. Perhaps there are Roman Catholics here this morning, and perhaps there is someone here that the Roman hierarchy has sent to hear what we have to say because of the ad we had in the paper yesterday. If this is so, I am glad you are here, and it is my prayer that you will put your faith in Jesus instead of any church, and thus be saved. Do no misunderstand us, we are not urging you to believe in our church to be saved. No church can save you—ours or any other. You must believe in Jesus Christ who paid all the price for your sin on the cross. Then you will have everlasting life immediately and forever. Jesus Christ Himself said in John 3:18, “He that believeth on him (on Jesus) is not condemned; but he that believeth not is condemned already, because he hath not believed in the name of the only begotten Son of God.”
For those of you who are Christians, it is my prayer for you that you go from this place with a realization that it is our task to lead the Romanist to Christ. If you leave with any other feeling, then our study this morning has been a failure. By the grace of God, realizing that no church saves, but that each individual soul must put his faith in the Lord Jesus Christ, let us be determined that we will bear a good testimony to all who are lost.