“God buries His workers and carries on His work.”

As most know by now, Dr. R.C. Sproul passed away on December 14th. We have lost a great pastor and teacher. A memorial service will be held tomorrow, Wednesday Dec. 20th at 2:00 PM Eastern Time, at the Saint Andrew’s Chapel in Sanford, Florida. The entire service will be live-streamed at RCSproul.com. There will also be a public visitation, at the Saint Andrew’s Chapel, today, Tuesday December 19th, from 9 AM to 3 PM.

As you might imagine, there have been many, many tributes published in memory of Dr. Sproul, acknowledging the inestimable ways in which he was used so mightily in the Lord’s kingdom. In particular, I was quite taken with what my friend Tom Martin, a retired judge who lives near Philadelphia, wrote upon hearing of Dr. Sproul’s passing. 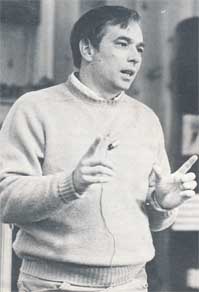 When James Montgomery Boice died of liver cancer in June of 2000, one of the men asked to speak at his memorial service at Tenth Presbyterian Church in Philadelphia was his close friend R. C. Sproul. As Sproul rose to the pulpit he reminded the crowd gathered (as he often did) of an historic parallel. He told of the words of Philip Melanchthon at the funeral held for Martin Luther in 1546, when Melanchthon compared the death of Luther to the removal from this world of the Jewish prophet Elijah, whose very name meant “Yahweh is God!” in defiance of idol worshipping king Ahab.

Melanchthon used the words of Scripture in II Kings 2, which were Elisha’s lament at the loss of his dear friend and mentor, the prophet Elijah:

“And it came to pass, as they still went on, and talked, that, behold, there appeared a chariot of fire, and horses of fire, and parted them both asunder; and Elijah went up by a whirlwind into heaven.

“And Elisha saw it, and he cried, My father, my father, the chariot of Israel, and the horsemen thereof. And he saw him no more: and he took hold of his own clothes, and rent them in two pieces.

“He took up also the mantle of Elijah that fell from him, and went back, and stood by the bank of Jordan;

“And he took the mantle of Elijah that fell from him, and smote the waters, and said, Where is the Lord God of Elijah? and when he also had smitten the waters, they parted hither and thither: and Elisha went over.”

It has taken a few hours for the death of R.C.Sproul to sink in to my thinking, for Sproul was a giant I was honored to know. I remember the first time he spoke to me by my first name “Tom” and I thought how privileged I was to have been with him from time to time and to have gotten to know the man well. R.C. was a true Christian. Imperfect. At times more hesitant than he seemed in public. Yet, a man with a genuine heart and love for Jesus.

Now he is gone. Others must carry on his work, and shrink from the reality that we don’t have him any longer to rely upon in the work of the Kingdom of God. We want to cry out “My father! My father!” Yet we see him no more.

We must recall that even in the sorrows of the death of Elijah his follower Elisha “took up also the mantle of Elijah that fell from him,” smote the rivers of the Jordan River, and the waters parted. The power of God is not diminished by the loss of God’s saints. As John Wesley wrote: “God buries His workers and carries on His work.” May the God of Elijah, the God of James Montomery Boice, and the God of R.C. Sproul carry on His work until Jesus comes again.

Links to some of the other many tributes have been gathered here:

Dr. Peter Lillback, president of Westminster Theological Seminary, has also shared two very memorable audio recordings of Dr. Sproul,
(1.) of his address at Westminster’s 83rd commencement ceremony, in 2012 and (2.) an interview with Dr. Sproul conducted earlier this year by Dr. Scott Oliphint.
Click here for the link to listen to either of these recordings.

Lastly, I would close with what Darrell B. Harrison and many others have pointed to as one of R.C.’s most important messages,
“The Curse Motif of the Atonement”

Pictured: Dr. R.C. Sproul speaking at a press briefing of the Congress on the Bible, March 1982.
Seated with him at the table are Dr. Bill Bright of Campus Crusade and Dr. Jim Boice, pastor of the Tenth Presbyterian Church, Philadelphia, PA.
This photo is from the Presbyterian Journal collection at the PCA Historical Center. 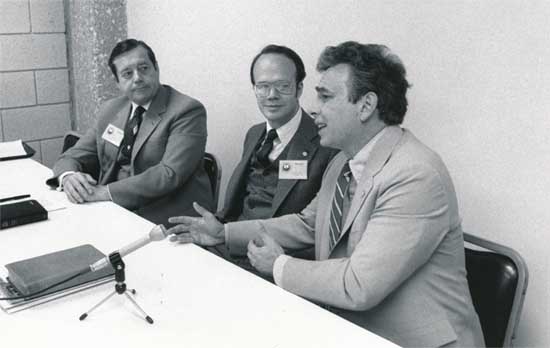