“Prepare what needs to be done.”

I suppose bookplates raise the topics of ownership, property, and the eighth commandment, “Thou shalt not steal.” But here, on vacation and facing the new year, we simply hope you will enjoy a bit of a holiday diversion with a small collection displayed:

Here’s a great quote that would be well suited for a bookplate:

“I have a peaceful study, as a refuge from the hurries and noise of the world around me; the venerable dead are waiting in my library to entertain me, and relieve me from the nonsense of surviving mortals.” — Samuel Davies

Another quote that I’m particularly fond of, supposedly by Ben Franklin:

“Only a fool loans books; half the books in my library were loaned.”

But apparently memory is a poor servant, or I was misinformed, for this site indicates the author of that quip was instead Anatole France:

Never lend books, for no one ever returns them; the only books I have in my library are books that other people have lent me.
– Anatole France

I think I like my version better. Anyway, all that by way of introduction and an excuse to present some bookplates from a few of the volumes in the research library at the PCA Historical Center:

Bookplates affixed inside a volume of the works of Jonathan Edwards.
This volume was originally owned by James H. Thornwell and then by
Rev. Thomas Dwight Witherspoon, whose papers are preserved at the PCA Historical Center.

Bookplate for book #489, dated 1859 and affixed inside Volume I of a Latin edition
of Calvin’s Institutes, affixed about the time he was installed in his first pastorate:

Another plate from Witherspoon’s library, this time from his copy of
The History of the Church of God, by C.C. Jones, apparently acquired while
Witherspoon was pastor of Second Presbyterian Church, Memphis, Tennessee,
the same church where Rev. George Robertson is now pastor:

And a bookplate from a volume previously owned by Dr. Robert G. Rayburn,
founding president of Covenant College and Covenant Theological Seminary: 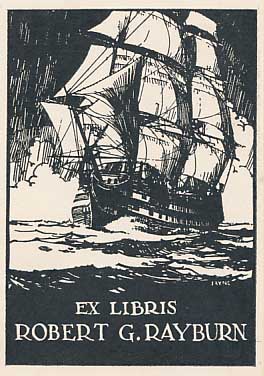 A plate from a book formerly owned by the Rev. Harry H. Meiners, Jr.,
founding pastor of several churches in New Mexico. 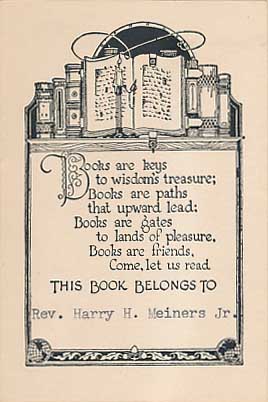 A bookplate used by the Rev. R.W. Chesnut, an early 20th century
patriarch of the Reformed Presbyterian Church, General Synod: 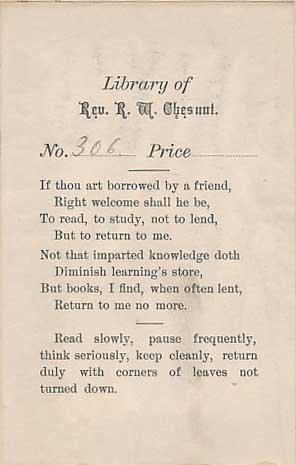 A plate from historic Maryville University in Tennessee: 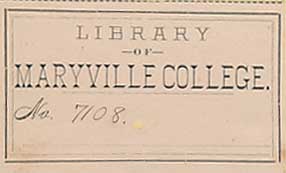 A bookplate used by the Rev. Clarence Read Lacy, a Southern Presbyterian
pastor who had an active ministry in Appalachia:

[the Latin motto can be translated as “Prepare what needs to be done.”]

One from a man with an unusual first name : 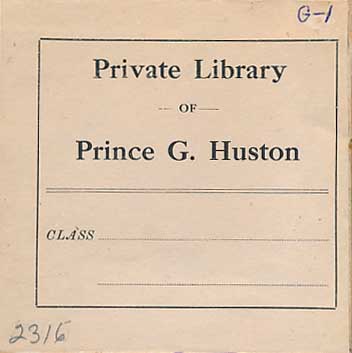 A portion of a bookplate from the church library of the Grand Cote Reformed Presbyterian
church. Book #34 in this case was Traditions of the Covenanters:

A plate from another church library, that of the Grace Street Presbyterian Church:

From the library of R.H. Reid:

An ink stamp used for the library of one Christopher A. Clark,
stamped inside a copy of Buck’s Theological Dictionary: 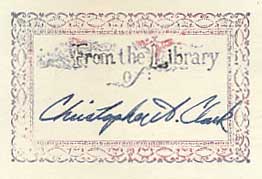 And lastly, a bookplate inside a copy of The Dead of the Synod of Georgia,
by John S. Wilson:

Words to Live By:
The new year does indeed face us. How will we use the time God gives us? Have we used this soon-past year for His glory? More than any plans for the future—for plans are so subject to change—are we living each day on our knees, in prayer before the throne of glory? Have we established a habit of committing each day to the Lord, seeking to do His will? Put the Lord first in all things, and He will bless your days.

So teach us to number our days, that we may apply our hearts unto wisdom.—Psalm 90:12, KJV.
Commit thy works unto the LORD, and thy thoughts shall be established.—Proverbs 16:3, KJV