All Glory to the One Who Saved Us. 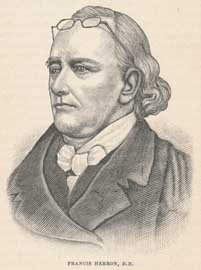 Yesterday we asked the question “Can we find a sermon by Francis Herron for this date? As it turns out, the answer was “No”. The Rev. Francis Herron was born on June 28, 1774 and he died on December 6, 1860. And to read the history books, he was greatly esteemed by his contemporaries and is remembered by many to this day, yet he published few works (see the list below)), and I could find only one actual sermon that was published.

But listen to what Dr. McKinney, editor of The Presbyterian Banner, said of him :

Dr. Herron was a man of note, unbounded in his hospitalitie, abundant in labors, and wielded an influence such as no other man exerted in this community among all classes of citizens, and among all denominations of Christians. His public spirit, and the wisdom of his counsels, were acknowledged by all. His integrity of character and purity of motive were doubted by none. His sermons were scriptural, doctrinal, practical, and pungent; full of the marrow of the Gospel, and delivered with convincing earnestness. As a pastor he was deeply interested in the welfare of his flock. He trained a most efficient eldership, and taught his people both from the pulpit and by his own example, the pressing claims of Christian benevolence, so that his church ranks with the most liberal [i.e., as in giving freely] in the land. Missionary operations in the West found in him a warm friend, and an earnest advocate. And the Western Foreign Missionary Society, from which our Foreign Missionary Board sprang, and from the beginning of which the Board should date its origin, received his hearty and effective co-operation. Foreign Missions and missionaries had a prominent place in his large and honest heart.
For many years he was an active Trustee of Jefferson College. And the Western Theological Seminary, with its Professors and students, was from its origin, a subject of heart-felt and prayerful solicitude. In the darkest hour he never yielded to despair, but always spoke the cheering word, opened the liberal hand, and rallied his own people to the rescue. And in the day of its final success, none rejoiced more heartily than he. He loved young men, especially candidates for the   holy ministry. No worthy student of theology ever went to him for advice or assistance, without receiving it.

Words to Live By:
It seems to me that the clear lesson, as we look at the life of Francis Herron, is that the character of a pastor speaks far more effectively and convincingly than what he may say or write. That he wrote so little and yet was so highly esteemed and well-remembered only serves to underscore that fact. So too for the rest of us: the world will probably not remember what most of us have said or done, but the testimony of our lives in Christ—the reality of our trust in our living Savior—will have an abiding effect on the lives we have touched. And isn’t that appropriate, that our lives should give all glory to our Lord Jesus Christ, and not to ourselves? We would not have it any other way.

For more on the life of Rev. Francis Herron, see the post by my friend Barry Waugh, at his blog Presbyterians of the Past.

A chronological bibliography for Rev. Francis Herron—
1835
“The duty and reasons of Christian diligence” in The Presbyterian Preacher [Pittsburgh], 1835. Pp. 145-160.