There was a good deal of serious scholarship which arose from among the early leaders of the Orthodox Presbyterian Church and the Bible Presbyterian Synod. And of the many who accomplished so much in their study and defense of the Scriptures, the Rev. Dr. R. Laird Harris was easily among the most notable of these scholars. 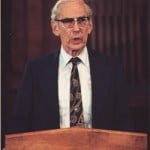 Dr. Harris served as moderator of the Bible Presbyterian Synod in 1956, the year in which the denomination divided. Harris defended the validity of church-controlled agencies against those who insisted on independent agencies, and he was one of many faculty members to resign from Faith Seminary that year. He became at that time one of the founding faculty members of Covenant Theological Seminary. He was professor there and chairman of the Old Testament department from 1956 until he retired from full-time teaching in 1981. He remained an occasional lecturer at Covenant, and was also a lecturer in Japan, Korea, and Taiwan and a visiting professor in India, Hong Kong and Germany following his retirement, while also working on further revisions to the New International Version translation of the Bible.

Harris was not only a teacher and church leader, but a prolific author as well. He published an Introductory Hebrew Grammar, the prize-winningInspiration and Canonicity of the Bible, and additional works such as Your Bible and Man–God’s Eternal Creation. He was editor of The Theological Wordbook of the Old Testament and a contributing editor to the Zondervan Pictorial Encyclopedia of the Bible, and wrote articles for the Wycliffe Bible Commentary and Expositor’s Bible. Also, as noted above, Dr. Harris served as chairman of the Committee on Bible Translation that produced the New International Version of the Bible .

Dr. Harris’ first wife, Elizabeth K. Nelson, died in 1980. He later married Anne P. Krauss and they resided for some time in Wilmington, Delaware before declining health prompted a move to the Quarryville Retirement Home in Quarryville, PA. Dr. Robert Laird Harris entered glory on 25 April 2008. The funeral service for Dr. Harris was conducted on 1 May 2008 at the Faith Reformed Presbyterian Church, Quarryville, PA, and internment was on 2 May 2008 in the historic cemetery adjacent to the Thompson Memorial Presbyterian Church, New Hope, Pennsylvania.

Words to Live By:
For those who enter upon the study of the Scriptures, especially at the academic level, there is a hidden pitfall. It is a deadly danger which ultimately springs from pride and the imposition of human intellect upon the very Word of God. By God’s grace, Dr. Harris avoided this pitfall and to his dying day, his heart remained humble before the Lord his God. The Puritan theologian John Owen, in his Biblical Theology, gives an excellent summary of both the problem and the proper, necessary approach that any scholar must maintain in the study of the Scriptures:

“Wherever fear and caution have not infused the student’s heart, God is despised. His pleasure is only to dwell in hearts which tremble at His Word. Light or frivolous perusal of the Scriptures is a sickness of soul which leads on to the death of atheism. He who would properly undertake the study of the Bible must keep fixed in his memory, fastened as it were with nails, that stern warning of the Apostle in Hebrews 12:28-29, ‘Let us have grace, whereby we may serve God acceptably with reverence and Godly fear; for our God is a consuming fire.’ Truly, ‘the fear of the Lord is the beginning of wisdom.’ If this fear is not experienced in the study of the Word, it will not display itself in any other facet of life.’
— Biblical Theology, by John Owen (Soli Deo Gloria, 1996), pp. 699-700.