“When I look for the acquaintances of my youth, alas! they are almost all gone. I have been led, for the most part, along a smooth path.“

Browsing through an old issue of THE ST. LOUIS EVANGELIST some time ago, I spotted the following brief article reporting on a letter from Dr. Archibald Alexander, dated 1822. Dr. Alexander was born in 1772 and would have been fifty years old when he wrote this letter. Given his age at that writing, his opening sentence is particularly striking, from a modern perspective. Equally intriguing are the biographical insights provided in this letter and the view expressed by Dr. Alexander on providing for one’s family and later years.

We have in our possession a long and interesting letter written by Rev. Dr. Archibald Alexander, from Philadelphia, while attending the meeting of the General Assembly, dated May 27, 1822, addressed to “Rev. Robert Marshall, near Lexington, Ky.,” sent by his son, Rev. James Marshall, upon his leaving Princeton Theological Seminary for his home and a field of labor in Kentucky. Most of it is in reference to his “unexceptionable conduct,” his “strength and originality of mind,” and the prospect that “he will be a forcible speaker, a useful man, and become an important member of the Church in the Western country.” We give an extract of general interest:

When I look for the acquaintances of my youth, alas! they are almost all gone. I have been led, for the most part, along a smooth path. External circumstances have been favorable, but I have been subjected often and long to severe conflicts. Perhaps in prosperity I have endured as much pain as those who have passed through many external afflictions. I have now a large family, and have made scarcely any provision for their subsistence when I shall be taken from them; but I am not troubled on this account. “The Lord will provide.” I have seen in so many cases the little benefit which has resulted from the fruit of anxious toil for posterity, that I feel content with my situation and prospects.

Such views from one so revered, so wise and so spiritual as was Dr. Archibald Alexander, we doubt not will be read with interest and profit by all. If we are in moderate circumstances, and our children promise to be upright, useful, respectable in life, we should be more than content; we should be joyful and grateful. People in affluent circumstances have more to fear than others for their descendants. “The lust of the world, the lust of the eye, and the pride of life” accomplish their slaughter chiefly among the rich. This is plain to all who are old enough to have observed the histories of households for forty years; and it is not surprising when we remember that evils in the heart are not so ruinous as when both in the heart and the life.–Herald and Presbyter.

Words to Live By:
I suppose one reason the above quote seems noteworthy to me is that it bears a note of similarity to a statement which Dr. Francis Schaeffer made, in a letter to Dr. Robert Rayburn, when both men were fighting cancer: 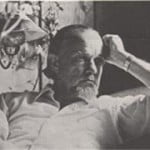 In my own case, of course, if I could wave a wand and be rid of the lymphoma I would do it.  Yet in my own case, in looking back over the whole two and a half years since I have known I have lymphoma, there has been more that has been positive than negative.  That is true on many levels and I am not just thinking of some vague concept of understanding people better, though I guess that is true as well.  Rather, in the total complex of everything that has happened I am convinced that there is more positive than negative.  I am so glad that though I increasingly am against any form of theological determinism which turns people into a zero and choices into delusions, yet I am also increasingly conscious of the fact that Edith and I have been, as it were, carried along on an escalator for the entirety of our lives.  I am left in awe and wonder with all this, and I very much feel the escalator is still in operation, not just in this matter of health, but in the battles that beset us on every side.
[emphasis added]

By itself, Alexander’s statement sounds like that of a charmed life, though I’m certain he suffered problems just like we all do. But what I see here is two Christians, separated by over one hundred years, each giving basically the same testimony, namely that regardless of the trials we may experience, God bears us up, carrying us through those times, drawing us nearer in love, comforting and protecting us. As the Psalmist says, the Lord God is our fortress, our strong Protector and our Deliverer. Truly, He smooths our paths.