What can one person do to stem the tide of evil? What effect can a solitary individual have upon those around them, upon the times and the reigning culture? A great effect, as it turns out, and an abiding testimony, as well, if the Lord is in it. As John Knox said, “A man with God is always in the majority.” 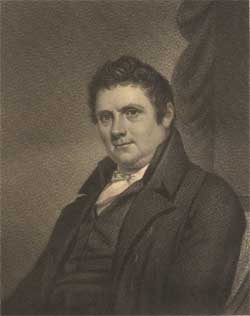 Alexander McLeod was born on the Isle of Mull, Scotland, on June 12, 1774, to godly parents. His father, the Rev. Niel McLeod, was a noted pastor in the Church of Scotland, and his mother “a woman of fine mind, solid sense, and fervent piety.” Alexander was among the youngest of twelve children born to this family, eight of whom lived to adulthood.

Devoted to the ministry from his birth, he had already received a competent education by the time that he immigrated to America in the spring of 1792.  Arriving in New York, he moved up along the Hudson to settle in the area near Schenectady, and graduated from Union College in 1798. Here he also joined a Reformed Presbyterian congregation and studied theology under the tutelage of the Rev. James McKinney. He was licensed in 1799, and on the eve of his ordination a year later, was informed that he would be called to a yoked pastorate, to concurrently serve congregations in Coldenham and New York City. But upon hearing that there were slave-holders among the Coldenham congregation, McLeod declared that he would not serve that congregation.

With the matter now brought before the Presbytery, they quickly determined to purge the Reformed Presbyterian section of the Church of the evil of slavery, and enacted a declaration that no slaveholder could be a member in good standing of the denomination. When the Reformed Presbyterian congregation in Rocky Creek, South Carolina, was later informed of the decision, in stunning obedience, they freed their slaves at a cost of not less than three thousand guineas, an amount equal to perhaps $500,000 in today’s value of gold.

For his part, a year or so later, Rev. McLeod wrote an historic explanation and defense of his position in the treatise commonly known as Negro Slavery Unjustifiable.  And his stand against slavery continued to ripple down through history. While Rev. McLeod died in New York on February 17, 1833—the same year that the Reformed Presbyterians split into New Light and Old Light factions—both sides of the split continued to uphold his testimony. Reformed Presbyterians of both stripes were active in opposing slavery and both were active participants with the underground railroad before and during the War.

Some years later, the Old Light “Covenanters” (as they were also known), established a bi-racial church in Selma, Alabama, with an attached school for African Americans. Both the church and Knox Academy continue to this day. Lawrence Bottoms, a covenant child of this church, grew up to become the first African American moderator of General Assembly in the Presbyterian Church, U.S. (aka, Southern Presbyterian). More recently, a seminary extension work has also begun at this location.

Words to Live By:
In Christ alone, God has given His children everything they need to live lives of righteousness and courage (Romans 8:31-39). We are called to stand for the truth, and to stand against sin, regardless of the cost. We are called to trust God for the results. It is only as we live in this way that we can be assured of having an abiding testimony before all the world. Remember, “A man with God is always in the majority.”