It was one of the longest funeral processions in which I had been privileged to drive.  And as a veteran pastor, I have had my share of those somber experiences.  But this procession of cars on August 23, 2001 stretched completely from the south  end of Leesburg, Virginia to the north end of that same town.  Every intersection was blocked off by members of Leesburg’s finest, so the cars could drive straight through to the cemetery, without stopping.  As I watched the Leesburg citizens go through their daily chores, paying scant attention to this slowly moving cavalcade of cars, I wanted to shout to them from my driver’s seat open window by saying, “Don’t you realize that a prince of Israel has entered heaven’s gates?” But it would have done little good. Then I realized suddenly that the hosts of heaven were already welcoming this child of God into the heavenly streets of gold, that they were singing praises to the King of kings, and Lord of Lords, with Edward Louis Kellogg joining in that praise. 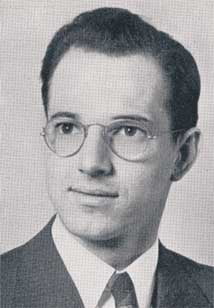 Edward Louis Kellogg was born on June 25, 1912 in Wheaton, Illinois.  With an address like that, you would wonder if he was related in some way to that college.  And he was related, with his great-grandfather being Jonathan Blanchard, the founder and first president of the college.  So of course, after highschool, he went to Wheaton as a student.  Meeting his future wife Eleanor Peterman there, they eventually went to Westminster Seminary in Philadelphia, where Ed sat under J. Gresham Machen, Cornelius Van Til, and John Murray.  Graduating from Westminster, at first they wished to go to the foreign field, but scarcity of funds prohibited that.  It was clearly God’s will that he stay in this country and start churches.

After eight years in Middletown, Pennsylvania at the Orthodox Presbyterian Church there, he moved out to California in 1954.  By this time, he and Eleanor had become parents to three children.  Two more children would be born in California.    Eight daughter churches would be started by the spiritual gifts of this man of God.  He would serve in seven churches (with some overlap to the eight daughter churches) in all.

He went to be with the Lord in 2001 to receive his rewards for service to Christ and Christ’s church.

Also on this day:
The PCUSA’s Donegal Presbytery received a letter of renunciation from George W. Marston, Franklin S. Dyrness and Everett C. DeVelde. These men were standing for the testimony of a faithful witness to the Lord Jesus Christ.

Words to Live By:  God’s overruling providence always gives us peace and contentment as to God’s will for our lives.  Learn to pray for, and live in, the light of that sure direction from your Sovereign God.

Through the Standards:  Sum of the first four commandments, then all of them