July 13: A Plea for Toleration?

A Plea for Tolerance or a Plan for Liberal Takeover—Which?

That was the fundamental question which was being debated in the Presbyterian Church, U.S.A., in the early decades of the twentieth century in the United States.  Should this historic church be allowed to have all sorts of opinions accepted within the church, or should the principles and practices of the  historic Christian faith be demanded by all those who are ordained into the church leadership?  This issue was brought to a head by two opposing sermons, both of which were printed and sent to the nation’s spiritual leaders. 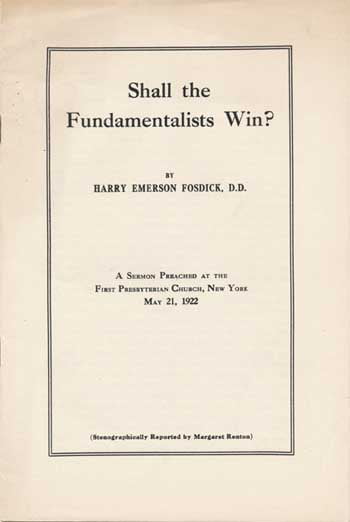 “Shall the Fundamentalists Win?” was the sermon which started the battle over which brand of Christianity should be accepted by the leadership of the Presbyterian Church.  Preached by Harry Emerson Fosdick at the First Presbyterian Church of New York City on May 21, 1922, this Baptist Associate Pastor  pleaded for tolerance of more liberal views of Christianity.  In reality, he affirmed that it was not necessary to believe in the sovereignty of God in history, or the inerrant Bible, or special creation.  The virgin birth could be denied by pastors and those in the pew without having to leave their churches and positions.  The Bible is not to be thought of as being without error and the supreme judge of all controversies of religion. Evolutionary science could be received by the visible church without harm. Negative sanctions should be placed in the past without hurting the gospel.  And ecumenism is the best way to go, as far as the end times are concerned.

This message, with printing financed by John D. Rockefeller, was sent out to 130,000 pastors and leaders. Its title was changed to “The New Knowledge and the Christian Faith.”

These two questions, and their sermons, were the opening salvos in the modernist-fundamentalist battles of the twenties and the thirties in American Presbyterianism.

Words to Live By:   Tolerance was pleaded by liberals.  But when they became in control of the church machinery, there was no tolerance for Reformed Christendom.  The latter ministers and elders were thrown out of the church.  Remember dear reader – once the essentials of Christianity are thrown out, then there is no real Christianity, no worship of the Triune God, no evangelistic efforts, and no hope for heaven’s shores left.  Always be ready to give an answer, or a defense, of the historic Christian faith.  Fight the good fight of faith.