Keeping the Patriotic Fires Burning on the Altar of Liberty
by Rev. David T. Myers

Known as “the fighting elder,”  Andrew Pickens was one of those rare men who talked little, but let his actions do the talking for him.  And when he was done “talking,” there was no doubt in what he had “said.”

Born in Buck’s County in Pennsylvania on September 13, 1739, of Scots-Irish Presbyterian  parents who had emigrated to the colonies, Andrew Pickens received the common schooling which most everyone else possessed.  In 1752, his parents moved to Waxhaws, South Carolina where they stayed for a while until 1764.  They bought land in Abbeville County, South Carolina near the Georgia border, and established Hopewell Plantation. In 1765, Andrew married Rebecca Calhoun, and produced a number of children with her.  The number is actually disputed, with some saying over a dozen children, others ten children, and still others six.

He and his wife being Presbyterians, they cultivated the habit of family worship, with daily devotions and the singing of psalms.  In fact, it was said that he was “so Presbyterian,” that he would have suffered martyrdom first before singing an Isaac Watts hymn!  Church observances obviously played a big part in his personal and family devotion.  Eventually, he was elected to the office of ruling elder later in life.

Coming to the colonies right around the time of the American Revolution, he played a prominent role in winning independence in the southern colonies.  Beginning as a captain of the militia, he eventually became a Brigadier General in the Continental Army.  He saw action at Cowpens, Augusta, the Seige of Ninety-Six, and Eutaw Springs.  Like Marion and Sumpter, he was an outstanding partisan fighter.

After the war, he served in various ways in government, first in the state, and then for a term in the national congress.  He is buried at Old Stone Presbyterian Church cemetery in Clemson, South Carolina.

Words to live by:  On his tombstone, it is inscribed that Andrew Pickens was “a Christian, a patriot, and a soldier.”  To some, the last two designations may seem contrary to the first one, that of a Christian. But some of God’s elect, like Joshua, and David, and the centurion of the gospels, these three descriptive names are not contradictory.  In fact, to those of us who enjoy the liberty which they in ancient and modern times have bought for us, we must be thankful for their service to God and country.  In fact, go to those who have served in our own military over the decades in your congregation, and thank them for their service.  Let us not just think of them on Memorial Day, or July 4th, but always through the year. And let us think of those on point today who are continuing to serve in harm’s way, and especially their families who are separated from them. 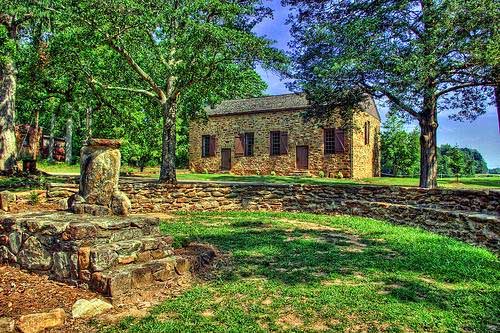 The Old Stone Church, The Westminster Abbey of the Upcountry. Home church of Andrew Pickens Family.