October 6: Warfield on Our Church Attendance

“We cannot afford to be wiser than our Lord in this matter. If any one could have pled that his spiritual experience was so lofty that it did not require public worship, if any one might have felt that the consecration and communion of his personal life exempted him from what ordinary mortals needed, it was Jesus. But He made no such plea. Sabbath by Sabbath even He was found in the place of worship, side by side with God’s people, not for the mere sake of setting a good example, but for deeper reasons. Is it reasonable, then, that any of us should think we can safely afford to dispense with the pious custom of regular participation with the common worship of our locality?” 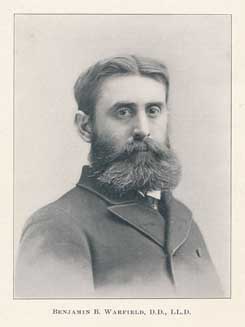 Concluding today with our review of Dr. Benjamin Breckinridge Warfield’s address, The Religious Life of Theological Students, we close with a section of his message which is highly applicable to us all.

I am not counseling you, you will observe, to make your theological studies your sole religious exercises. They are religious exercises of the most rewarding kind; and your religious life will very much depend upon your treating them as such. But there are other religious exercises demanding your punctual attention which cannot be neglected without the gravest damage to your religious life. I refer particularly now to the stated formal religious meetings of the Seminary. I wish to be perfectly explicit here, and very emphatic. No man can withdraw himself from the stated religious services of the community of which he is a member, without serious injury to his personal religious life. It is not without significance that the apostolic writer couples together the exhortations, “to hold fast the confession of our hope, that it waver not,” and “to forsake not the assembling of ourselves together.” When he commands us not to forsake “the assembling of ourselves together,” he has in mind, as the term he employs shows, the stated, formal assemblages of the community, and means to lay upon the hearts and consciences of his readers their duty to the church of which they are the supports, as well as their duty to themselves. And when he adds, “As the custom of some is,” he means to put a lash into his command. We can see his lip curl as he says it. Who are these people, who are so vastly strong, so supremely holy, that they do not need the assistance of the common worship for themselves; and who, being so strong and holy, will not give their assistance to the common worship?

Needful as common worship is, however, for men at large, the need of it for men at large is as nothing compared with its needfulness for a body of young men situated as you are. You are gathered together here for a religious purpose, in preparation for the highest religious service which can be performed by men—the guidance of others in the religious life; and shall you have everything else in common except worship? You are gathered together here, separated from your homes and all that home means; from the churches in which you have been brought up, and all that church fellowship means; from all the powerful natural influences of social religion—and shall you not yourselves form a religious community, with its own organic religious life and religious expression? I say it deliberately, that a body of young men, living apart in a community-life, as you are and must be living, cannot maintain a healthy, full, rich religious life individually, unless they are giving organic expression to their religious life as a community in frequent stated diets of common worship. Nothing can take the place of this common organic worship of the community as a community, at its stated seasons, and as a regular function of the corporate life of the community. Without it you cease to be a religious community and lack that support and stay, that incitement and spur, that comes to the individual from the organic life of the community of which he forms a part.

I trust you will not tell me that the stated religious exercises of the Seminary are too numerous, or are wearying. That would only be to betray the low ebb of your own religious vitality. The feet of him whose heart is warm with religious feeling turn of themselves to the sanctuary, and carry him with joyful steps to the house of prayer. I am told that there are some students who do not find themselves in a prayerful mood in the early hours of a winter morning; and are much too tired at the close of a hard day’s work to pray, and therefore do not find it profitable to attend prayers in the late afternoon: who think the preaching at the regular service on Sabbath morning dull and uninteresting, and who do not find Christ at the Sabbath afternoon conference. Such things I seem to have heard before; and yours will be an exceptional pastorate, if you do not hear something very like them, before you have been in a pastorate six months. Such things meet you every day on the street; they are the ordinary expression of the heart which is dulled or is dulling to the religious appeal. They are not hopeful symptoms among those whose life should be lived on the religious heights. No doubt, those who minister to you in spiritual things should take them to heart. And you who are ministered to must take them to heart, too. And let me tell you straight out that the preaching you find dull will no more seem dull to you if you faithfully obey the Master’s precept: “Take heed how ye hear”; that if you do not find Christ in the conference room it is because you do not take him there with you; that, if after an ordinary day’s work you are too weary to unite with your fellows in closing the day with common prayer, it is because the impulse to prayer is weak in your heart. If there is no fire in the pulpit it falls to you to kindle it in the pews. No man can fail to meet with God in the sanctuary if he takes God there with him.

How easy it is to roll the blame of our cold hearts over upon the shoulders of our religious leaders! It is refreshing to observe how Luther, with his breezy good sense, dealt with complaints of lack of attractiveness in his evangelical preachers. He had not sent them out to please people, he said, and their function was not to interest or to entertain; their function was to teach the saving truth of God, and, if they did that, it was frivolous for people in danger of perishing for want of the truth to object to the vessel in which it was offered to them. When the people of Torgau, for instance, wished to dismiss their pastors, because, they said, their voices were too weak to fill the churches, Luther simply responded, “That’s an old song: better have some difficulty in hearing the gospel than no difficulty at all in hearing what is very far from the gospel.” “People cannot have their ministers exactly as they wish,” he declares again, “they should thank God for the pure word,” and not demand St. Augustines and St. Ambroses to preach it to them. If a pastor pleases the Lord Jesus and is faithful to him,—there is none so great and mighty but he ought to be pleased with him, too. The point, you see, is that men who are hungry for the truth and get it ought not to be exigent as to the platter in which it is served to them. And they will not be.

But why should we appeal to Luther? Have we not the example of our Lord Jesus Christ? Are we better than He? Surely, if ever there was one who might justly plead that the common worship of the community had nothing to offer him it was the Lord Jesus Christ. But every Sabbath found Him seated in His place among the worshiping people, and there was no act of stated worship which He felt Himself entitled to discard. Even in His most exalted moods, and after His most elevating experiences, He quietly took His place with the rest of God’s people, sharing with them in the common worship of the community. Returning from that great baptismal scene, when the heavens themselves were rent to bear Him witness that He was well pleasing to God; from the searching trials of the wilderness, and from that first great tour in Galilee, prosecuted, as we are expressly told, “in the power of the Spirit”; He came back, as the record tells, “to Nazareth, where He had been brought up, and”—so proceeds the amazing narrative—”He entered, as His custom was, into the synagogue, on the Sabbath day.” “As His custom was!” Jesus Christ made it His habitual practice to be found in His place on the Sabbath day at the stated place of worship to which He belonged. “It is a reminder,” as Sir William Robertson Nicoll well insists, “of the truth which, in our fancied spirituality, we are apt to forget—that the holiest personal life can scarcely afford to dispense with stated forms of devotion, and that the regular public worship of the church, for all its local imperfections and dullness, is a divine provision for sustaining the individual soul.” “We cannot afford to be wiser than our Lord in this matter. If any one could have pled that his spiritual experience was so lofty that it did not require public worship, if any one might have felt that the consecration and communion of his personal life exempted him from what ordinary mortals needed, it was Jesus. But He made no such plea. Sabbath by Sabbath even He was found in the place of worship, side by side with God’s people, not for the mere sake of setting a good example, but for deeper reasons. Is it reasonable, then, that any of us should think we can safely afford to dispense with the pious custom of regular participation with the common worship of our locality?” Is it necessary for me to exhort those who would fain be like Christ, to see to it that they are imitators of Him in this?

Words to Live By:
Your brothers and sisters in Christ hope to see you gather together with them to worship our risen Lord and Savior. See you in Church this Sunday!
Not forsaking the assembling of ourselves together, as the manner of some is; but exhorting one another: and so much the more, as ye see the day approaching.—Hebrews 10:25.