Rev. Sisag Krikor Emurian was born on March 3, 1874 and died on this day, November 20, 1968, at the age of 94. His remains were buried in Suffolk, Virginia. With a long life come many accomplishments, but he is perhaps most commonly remembered for his setting of the Lord’s Prayer to music [here, in English and here, in his native Armenian tongue]. But our focus today is on his adaptation of the Westminster Shorter Catechism to music. Others have also done similar work, but his settings were in the classical tradition! What follows is a review of that work that appeared not long after its publication in 1936. A photograph of Rev. Emurian can be found here.

Singing the Catechism!
by Rev. Klaas Jacob Stratemeier
in The Presbyterian Messenger

We have no apology to make or our Westminster Shorter Catechism. By all the tests of life and history it has proved its worth over and over again. It has been the means and instrument of leading not only individuals but whole nations into a rugged consistent and devoted expression of faith and life. Here is a document often considered antiquated, often maligned as being too exact in its definitions, often discarded as too difficult to comprehend, which nevertheless lives and exerts a tremendous influence.

That influence is still to be enlarged, we firmly believe, by the daring venture of setting this Catechism to music. The Presbyterian Committee of Publication, Richmond, Virginia, has undertaken this task and has succeeded excellently as the product demonstrates. The work has been done by Rev. S.K. Emurian and Henri Emurian. This musical setting is prefaced by “A Concise History of the Shorter Catechism.” Dr. Ernest Trice Thompson, of the Union Theological Seminary, Richmond, has written this resume. It offers a fine review of the place and influence of the Catechism throughout the world. It serves as a real introduction to the work, because Dr. Thompson’s remarks are highly illuminating and informative. How many know, for instance, that our Catechism has seen translations into the Latin, Greek, Hebrew, Syriac, Arabic, Portuguese, and many more familiar languages? Surely we have a document here to be prized and to be given a prominent place in the teaching and preaching program of the Church.

But to set the Catechism to music! How can it be done, and is such an attempt not an altogether unpromising venture? Not in the light of the product we have before us. This musical arrangement of the Catechism makes a bid for serious attention. The music is not too difficult to be handled by the regular church choir. Divided into solo, quartet, and full chorus numbers, it provides sufficient variation to furnish an interesting program. This arrangement omits the ten commandments and the Lord’s Prayer because these have received consideration in former productions. But in the thirty-six questions offered here in musical form, there is clearly a working toward a climax, and when at the end the full chorus takes up the mighty strain: “At the resurrection believers being raised up in glory, shall be openly acknowledged, and acquitted in the day of judgment and made perfectly blessed in the full enjoying of God to all eternity,” we recognize the force of the great finale and are transported as it were to the day of great triumph and final victory over sin and death and [the] grave. We trust that many churches will be induced to give this production a place in their musical program. This is a dignified service, calculated to stir and deepen our faith in the eternal verities. This musical setting of the Catechism sells for seventy-five cents the copy and can be secured from the Presbyterian Committee of Publication, Richmond, Va. 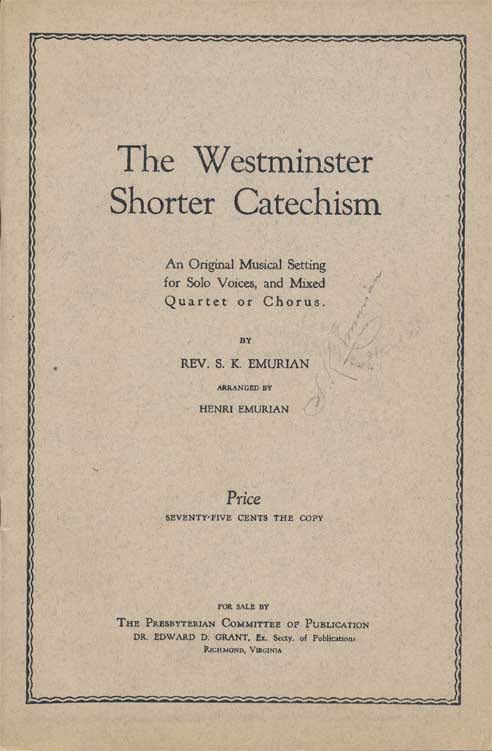