A Man Who Cared Greatly, Standing Faithfully in Christ.

Our post today comes from guest author, Rev. Dennis Bills, who since 2012 has served as pastor of Trinity Presbyterian Church (PCA) in New Martinsville, West Virginia. Besides his recent publication, A Church You Can See: Building a Case for Church Membership, and in addition to his labors as shepherd of the Lord’s people there at Trinity, he is also a diligent student of history and for the last several years has been preparing a volume on the history of Presbyterianism in West Virginia. That work will likely see publication some time in the coming year.A Ma
Today’s post draws from this forthcoming book, and accordingly we have chosen to retain his footnotes, as they are a further help and interest:

Presbyterians should remember Henry Ruffner as the founder of Presbyterianism in the Kanawha Valley of West Virginia, including three prominent churches that still exist today; for his vocation as professor and president at Washington College (now Washington and Lee University); and for his influential anti-slavery efforts in the years leading up to the Civil War.

Dr. Ruffner was born in the Shenandoah Valley on January 16, 1790. In 1796, his grandfather Joseph Ruffner and father Colonel David Ruffner moved the family to the Kanawha Valley to build the area’s first salt works on a 502 acre tract by the Kanawha River.[1] Young Henry Ruffner preferred scholasticism to salt, so in 1809, at age nineteen, he moved to Lewisburg to study at Dr. John McElhenney’s classical school. He was so well prepared by McElhenney that he was able to move on to Washington College to finish the complete curriculum in only a year and a half. As was the way for ministers in the frontier regions, he was tutored in theology by the president of the college for an additional year before being licensed to preach by Lexington Presbytery in 1815.

For the next four years, the young licentiate preached up and down the Kanawha Valley. The Society of Christians Called Presbyterians gathered to hear him preach in two locations:  on his father’s property near the saltworks in Malden—a place known as Colonel Ruffner’s Meetinghouse—and at the courthouse in Charleston six miles downriver to the north.[2] At the same time, he also taught at and apparently paid for much of the construction of the new Mercer Academy near the courthouse. The wealthy Ruffner family’s influence was still on display, as young Henry’s work was subsidized by and the academy was built on land donated by his father.

Ruffner did not stay to pastor the church he founded. Soon after, he embarked on a career in education at his alma mater Washington College, progressing from Latin and Greek professor in 1819 to president in 1838. In 1847, Ruffner wrote a widely-distributed anti-slavery pamphlet called “Address to the People of West Virginia.” [5] The controversy of the pamphlet occasioned his retirement from the presidency in 1848, whereupon he returned to the Kanawha Valley around 1850. With an eye toward finishing out his years in serenity, he bought property seven miles up Campbell’s Creek and tried his hand at sheep farming.[6] He was unsuccessful. Thankfully he was still a preacher, so he returned once again to the pulpit of the church he had started forty years before. He may have served as pulpit supply until they called their next pastor in 1853. When the pulpit became vacant once again in 1857, Ruffner appears in the records once again for one year as the moderator of the session and the church’s stated supply.[7] He died on December 17, 1861 and was buried in the small family plot a few hundred yards north of the church.[8] Toward the end of his life, he expressed regret that he had not stayed home all those years to minister in West Virginia. He wondered whether he could have perhaps done more for the Kanawha Valley if he had spent his life preaching in the hills and hollers.[9]

During the decade preceding the Civil War, Dr. Ruffner foresaw the approaching catastrophe, as is shown by his Union speech delivered during that period, and it depressed him grievously in both body and mind, and no doubt shortened his life. About the time that the Cotton States seceded his nervous system broke down utterly, and he was no longer able to preach. Gradually his strength failed without any attack of acute disease. His mind continued clear and that sweet peacefulness of spirit which had always characterized him never changed. His trust in God and his own hope in the future retained firm to the latest hour. He ceased to breathe December 17, 1861, aged 71 years and 11 months.

[2] In the 1700s “Societies for Christians” were formed by pioneers in areas where ordained ministers of the Word and Sacrament were unavailable or where colonial prejudices and policies obstructed the organization of non-Anglican churches. By Ruffner’s time, the Commonwealth no longer enforced such rules on the frontier, so the Society was free to organize as a church.

[4] The first two churches have the most obvious claim to direct lineage. The Kanawha Salines Church may hold the original constitutional document signed by Henry Ruffner and still meets in an original Malden structure built in 1840 before the congregation divided. The Kanawha Presbyterian Church continues the name of the original congregation and holds certain key historical records, but the First Presbyterian Church (which is ironically the third chronologically), retains and has built upon the original property donated by the Ruffner family in Charleston.

[8] The location of the plot is not easy to find, although many of the older locals no doubt know its location. I was able to locate it using descriptions, photos, and google maps on an out of the way spot on an industrial property nearby. The company maintains the cemetery, and the family tells me the company will open it up for inquirers who provide notice.

[9] Specifically, he regretted that he did not stay to foster a short-lived church he had started in Teays Valley at the same time as the Kanawha Church.  He also regretted that he was unauthorized to organize a church up the Pocatalico River when he was only licentiate. Instead, the folks he had been preaching to were turned over to another preacher who successfully started a Methodist church.  He did not begrudge this—he and the preacher were friends, and he felt that some religion was better than none at all. But he felt the loss for his denomination. He also regretted that, during his brief time preaching in the Kanawha Valley, he had focused too much on outreach to rural areas, and not enough on areas where churches were likely to be more viable in the long term. West Virginia Historical Magazine Quarterly, April 1902. The Ruffners No. IV. Henry. First Article. By Dr. W. H. Ruffner.
http://www.wvculture.org/history/antebellum/ruffnerhenry01.html

Shown here, a tentative cover for the new book by Rev. Dennis Bills: 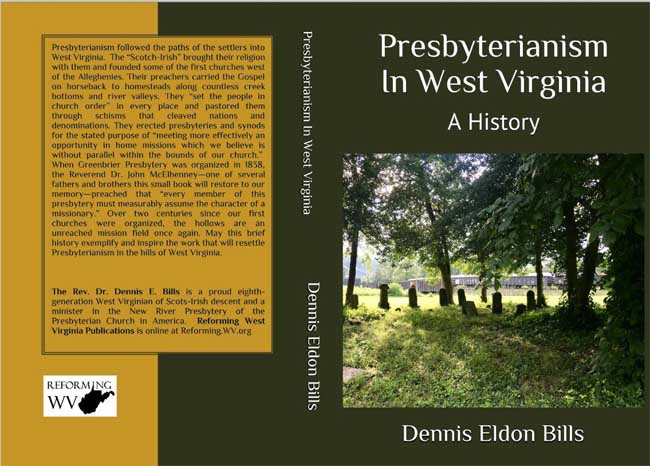