The little girl found the dead Union sergeant on Stratton street in Gettysburg, Pennsylvania. To find a dead soldier on a street was not unusual on the days following the first three days of July in 1863. He was just one of seven thousand soldiers, both Confederate and Union, who had died in and around that small northern town after that Civil War battle. What made his death unusual was his last gaze upon a tin-type photo of his three small children, which he held tight in her hands in death. Who were these children, and who was this deceased soldier? That was the question which would occupy the nation’s conscience for two years.

Carrying the tin photo back to her inn-keeper father, the picture provided a steady stream of conversation among the patrons of that inn eight miles west of Gettysburg. When a medical doctor, Dr. John Bourns, came to treat the wounded from the pivotal battle, his wagon broke down near the inn. Waiting for its repair, he too went into the inn, and heard the story of the three unknown children. Convincing the inn keeper that he could better help in their identity by advertising through a city newspaper, he took the photo back to Philadelphia after his months of treating the wounded. 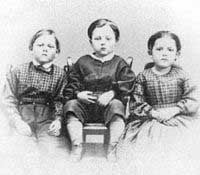 When the news story was published in the October 19, 1863 Philadelphia Inquirer, the story of the “Children of the Battlefield” became a national story.  The article was picked up by other news media, including The American Presbyterian magazine, on November 19, 1863.  That issue went to a subscriber in Portville, New York, where it was read eventually by all the citizens of the small town, including Mrs. Philinda Humiston. Contacting Dr. Bourn, she was visited by the medical doctor, along with her pastor, the Rev. Issac Ogden, of the Portville Presbyterian Church, on this day of January 2, 1864. Shown the blood-stained photo of her three children, she realized what she had feared all along in not hearing from her husband, that she was a widow, and her three children Frank, Freddie, and Alice were orphans. Her husband was Amos Humiston, of the 154th New York regiment, killed on July 1, 1863.  A monument stands today next to the fire station on Stratton Street near the site of his death. And the tin type photo can still be seen at the Visitor’s Center of the National Battlefield Park in Gettysburg, Pennsylvania.

Words to Live By: There is no luck, chance, or fortune which allowed or ordained all these actions. “God the great Creator of all things does uphold, direct, dispose, and govern all creatures, actions, and things, from the greatest even to the least. Westminster Confession of Faith, chapter 5, section 1.