Pastor Ken McHeard is the current pastor of the Reformed Presbyterian Church (PCA) in Duanesburg, New York, engaged in a faithful ministry there, as he follows a long and eminent roster of pastors at that church. The organizing pastor of this historic church was the Rev. James McKinney, who served the church from 1797-1802. The second pastor and the subject of our post today, the Rev. Gilbert McMaster, served the Duanesburg congregation in a lengthy pastorate, from 1808-1840.

Gilbert was born near Belfast, Ireland, on February 13, 1778. Of his parents, it was said that “his father was a man of intelligent and earnest piety,” and that his mother “was very

respectably connected, was a person of superior intellect and great force of character.” Gilbert enjoyed the advantages of a faithful Christian education and at the age of eighteen came to a public profession of his faith in Christ as his Savior. This was some five years after the family had immigrated to the United States and settled in Franklin county, Pennsylvania.  Gilbert continued his education at the Franklin Academy and Jefferson College before beginning medical studies, and was admitted to the medical practice in 1805, becoming a physician in the borough of Mercer, PA. 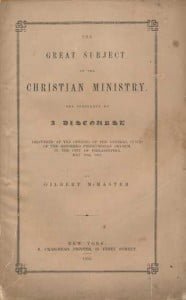