Guest author Dennis Bills, pastor of the Trinity Presbyterian Church (PCA) in New Martinsville, WV, returns today with a most interesting post. This account will likely will be found in Dennis’s pending work on the history of Presbyterianism in West Virginia, which is due to be published later this year.

For thirty years, John C. Bowyer was janitor and sexton of the Old Stone Church in Lewisburg, West Virginia, first as a slave, then as an employee. He seems to have been mostly forgotten—the only references I have encountered are found in the Recollections of the Rev. John McElhenney D.D. by McElhenney’s granddaughter Rose Fry (1847-1902) and in “Colonel John Stuart of Greenbrier,” a historical reminiscence by Stuart’s great-granddaughter Margaret Lynn Price (1842-1917). Both Fry and Price called him Uncle, a paternalistic term of honor and endearment by which he was known in the church community.

Dr. McElhenney first rented Bowyer from an unnamed woman and put him to work at the church. McElhenney had once owned slaves himself, but sometime before the war he had freed them and hired them to work his farm at a “fair wage.” After Bowyer’s emancipation, McElhenney paid one third of Bowyer’s full salary in order to keep him on at the church. Fry says he was McElhenney’s “right hand man,” and that “a better sexton, or more reliable work-hand than this yellow man never lived; and grandfather would have considered himself ruined without John Bowyer!”

As the church sexton, Bowyer cleaned the building, opened it for services, lit the fires, rang the bell, kept the grounds, and buried the dead. A search of the cemetery for stones dated between 1858 and 1888 would likely reveal hundreds of graves dug with his own hands. But he himself was not buried there. Around age 73, he was laid to rest in the cemetery across the street from the white graveyard. Fry says, “A simple stone marks his grave in the colored plot, and there were many who thought it would not have been inappropriate to lay him alongside of his white brethren, amidst the dust of hundreds whom he had committed to their last resting-place.” 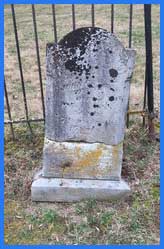 John C. Bowyer deserves to be remembered for several reasons: 1) Though his work was menial and unremarkable, the community apparently respected him for his faithfulness, longevity, and attention to detail. 2) He served the Church, at first by compulsion and then of his own free will. The record does not tell us what other opportunities were available to him following his emancipation—perhaps there were none. But he “always swore by what Mr. McElhenney said and did, both in the pulpit and out of it. He took his old master’s every word and command as gospel truth, and carried out his instructions to the letter.” Thus it seems he stayed on willingly, out of affection for his pastor and the church. 3) In spite of his three decades of faithful service and the respect it supposedly earned him, he was laid to rest in the “colored” cemetery and eventually forgotten, to the shame of the Church both then and today. The names of most African-Americans from that time and place are lost to history, and few today know they ever lived. If we cannot revive the memory of them all, we shouldn’t forget those we do know. In remembering John C. Bowyer, we remember what little we can of a people who did not deserve to be forgotten.

[2] Laidley, 119-127. It is especially disappointing that I can find no mention of Bowyer in Montgomery’s official History of the Old Stone Presbyterian Church, even on the fifteen-name list of “Our Negro Members” found on p. 340. Previously, the book lists hundreds of members and the dates of their reception between 1838-1983. These were either all white or the church progressed beyond creating a segregated list of black members as early as 1867.

[4] The source is identified as a 160th Anniversary of Greenbrier County Commemorative Booklet, published in 1938, and transcribed by Lori Samples from a booklet passed down to her from her grandfather. Accessed December 1, 2018. http://www.wvgenweb.org/greenbrier/history/160th5.htm.

[6] Fry, 189.  “Yellow” was a term used during Fry’s era (late 19th century) to describe certain light skinned blacks who may have been viewed as more socially acceptable due to their skin color. Fry says that “Uncle John” was more warmly attached to the whites than to his own race.” The use of the word may distinguish Bowyer from darker-skinned blacks as though it were complimentary.  See Taunya Lovell Banks, “Colorism: A Darker Shade of Pale,” UCLA Law Review 47 (2000), accessed June 6, 2018, http://digitalcommons.law.umaryland.edu/fac_pubs/217.

[7] Bowyer is listed twice in Greenbrier County records with different death dates (March 17 and 19). According to his tombstone, the latter is correct. The first entry lists a cause of death as Acute Diarrhea and the second as General Debility. In the first he is designated MBS (Male, Black, Single) and then as MB (Male, Black). Larry G. Shuck, comp., Greenbrier County Death Records 1853-1901 (Athens, GA: Iberian Publishing, 1993), 25. However, according to Bowyer’s Find-A-Grave entry (publicly edited), he was married to Elizabeth Folden Bowyer. Accessed June 6, 2018. https://www.findagrave.com/memorial/111656177/john-bowyer.