C. Howard Oakley was born in Haddonfield, New Jersey on May 19, 1917 to parents H. Burton Oakley and his wife Anna Elizabeth Richardson Oakley.  Howard was educated at Columbia Bible College, graduating with the BA degree in 1942.  He next attended Faith Theological Seminary and graduated with the Master of Divinity degree in 1945.  He was licensed and ordained in 1945 by the New Jersey Presbytery of the Bible Presbyterian Church and installed in his first pastorate, serving at the First Bible Presbyterian Church of Seattle, Washington from 1945 to 1957.  As was so common in an earlier day, the young pastor waited until he had a pulpit before he married, and so on December 7, 1945, he married Beverly Jane Bates, also of Seattle, WA.  Children born to this marriage include Bruce Howard, Phyllis Ann, and Susan Carol.  Toward the end of his time in Seattle, Rev. Oakley engaged in graduate level work at the University of Washington, attending there during the academic year of 1956-1957.

Rev. Oakley next answered a call to serve the congregation of the Foothills Presbyterian Church of LaCrescenta, California, remaining in that pulpit from 1957 to 1961.  He left the pulpit ministry for a time and took on the duties of executive director of the National Presbyterian Missions of the Reformed Presbyterian Church, General Synod, from 1961 to 1963.  During these same years he also served as an instructor at Covenant Theological Seminary in St. Louis,

From 1963 to 1970, Rev. Oakley was pastor of Covenant Presbyterian Church in Cherry Hill, New Jersey and from 1973 to 1980, he served as pastor of First Reformed Presbyterian Church in Memphis, Tennessee.  It was during this pastorate that he graduated from Covenant Theological Seminary with the Doctor of Ministry degree, in 1978.  His dissertation is preserved at the Covenant Theological Seminary library and is titled The Pastor and the Federal Prison : A Practical Program for Community Involvement for Working in a Federal Prison.

In 1981, he was granted the privilege of laboring out-of-bounds as assistant pastor at Central Church (non-PCA) in Memphis, and he retained this position from 1981 until 1994.  For many of these same years (1987-1992, he taught at Crichton College, while also conducting a television ministry, “What Is Your Faith?” from 1985 to 1990.

Rev. Oakley is noted as having a radio ministry while serving in Seattle, Cherry Hill and Memphis.  He was honorably retired in 1994, but his last pulpit was in 1996, as interim pastor of Morning Sun Cumberland Presbyterian Church, Memphis, TN. Dr. Oakley died on Wednesday, March 2, 2005, at the age of 87.

Words to Live By:
Quietly, without drawing particular attention to himself, Rev. Oakley faithfully served the Lord’s people in the various stations where he was placed. In so many ways he was an example to the flock, and will, we trust, receive that crown of glory which will never fade away.

1 Peter 5:1-4
1 To the elders among you, I appeal as a fellow elder and a witness of Christ’s sufferings who also will share in the glory to be revealed:
2 Be shepherds of God’s flock that is under your care, watching over them—not because you must, but because you are willing, as God wants you to be; not pursuing dishonest gain, but eager to serve;
3 not lording it over those entrusted to you, but being examples to the flock.
4 And when the Chief Shepherd appears, you will receive the crown of glory that will never fade away.

Pictured below, the students of Faith Theological Seminary in 1945. Howard Oakley is seated on the front row, fifth man in from the right side. 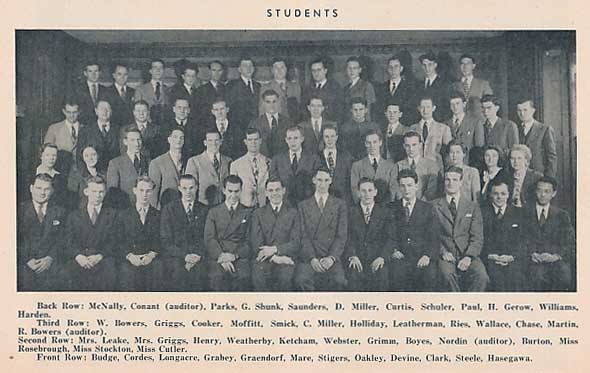