April 1: United Synod of the South

The Brief Life of a Denomination You Probably Never Heard Of.

Well, they were more commonly known as the United Synod of the South.

To get to the United Synod, and for a bit of background, yet without bogging down in detail, let’s quickly rehearse some of the significant Presbyterian schisms.

First, there was the Old Side-New Side split in what later became the Presbyterian Church in the U.S.A. (1789). That split ran from 1741 to 1758, at which point the split was mended.

Next, there was the schism in 1810 that created the Cumberland Presbyterian Church. Centered primarily in
Tennessee and Kentucky, they left because they came to reject certain key doctrines of Calvinism.

As an aside, we’ll also mention the 1833 split of the Reformed Presbyterian Church into Old Light (RPCNA) and New Light (RPCGS) factions.

Coming back to the PCUSA, there was the big split in 1837 which created the Old School and New School divisions. This split had been over serious matters. The Old School side wanted an end to the Plan of Union (a church-planting arrangement with Congregationalists). But the Old School men particularly wanted to rid the Church of doctrinal errors known as Hopkinsianism or New Haven Theology. Not all New School men held to those views, but many did.

After that split, Old School and New School went their separate ways. [This division was mended in 1869, but that’s another story.]

The Old School wing of the PCUSA split in 1861, a month after the Civil War began. It split north and south, and that’s what created the Southern Presbyterian Church. But to be accurate, this split was not over the issue of slavery, but over something called the Gardiner Spring resolution. The 1861 Old School General Assembly adopted this resolution, which in part required pastors to swear an oath of allegiance to the federal government. Many thought that was an inappropriate thing for a church to do, and obviously the Southern pastors, with the war already underway, decided not to go along with that idea, so they split.

But back to the United Synod, this is where it gets interesting. Particularly because most historians don’t give it much, if any, attention. The United Synod was a split from the New School wing of the PCUSA.

One noted historian, Kenneth J. Foreman, Jr., has argued convincingly that “although slavery was a pervasive issue touching everything in America in the 1830’s, it was not one of the issues on which the 1837-38 Old School Presbyterians divided from the New.” Basically, there were strong pro-slavery elements and strong abolition elements in both Old School and New School wings of the division.

But as the New School Presbyterians began their separate existence, the issue of slavery became more and more central, just as it did throughout the nation at large. Finally, things came to a head for the New School when its General Assembly met in Cleveland in 1857.

Historian Harold M. Parker, Jr. says “There can be no doubt that the momentous Dred Scott decision of 6 March 1857 played an influential role in the New School Assembly’s action of that year. Clifton E. Olmstead has commented that with the decision ‘moderate evangelists were convinced that the time for charity and patience was over.’ Even the opponents of radicalism found themselves in the camp of the advocates of immediate abolitionism. Such ‘came not to bring peace but a sword with which to amputate the gangrenous member of American Society and purify the nation for its divine mission to the world.’ “

The New School Assembly began on May 21st, but it wasn’t until Friday, May 29th that they began to consider an overture regarding slavery. For four days they wrestled with the matter. Finally, the Assembly managed to adopt a paper which began:

“The General Assembly, in view of the memorials before them and of the present relations of the Church to the subject of Slavery, feel called upon to make the following exposition of principle and duty. The Presbyterian Church in these United States has, from the beginning, maintained an attitude of decided opposition to the institution of Slavery.”

[the paper then began to detail the various examples of that opposition. on pages 401-404. Contact me at archivist {AT} pcahistory [dot] org, if you would like to have the full text of that amended overture].

Having marshaled its evidence, the adopted paper concluded:

“We do not indeed, pronounce a sentence of indiscriminate condemnation upon all our brethren who are unfortunately connected with the system of Slavery. We tenderly sympathize with all those who deplore the evil, and are honestly doing all in their power for the present well-being of their slaves, and for their complete emancipation. We would aid and not embarrass such brethren. And yet, in the language of the General Assembly of 1818, we would “earnestly warn them against unduly extending the plea of necessity; against making it a cover for the love and practice of Slavery, or a pretense for not using efforts that are lawful and practicable to extinguish this evil.”

Clearly the New School Assembly was trying to take a firm stand, yet still they were treating the Southern New Schoolers with “kid gloves.”  How much different was the action of the Reformed Presbyterian Church when it sat down to discuss slavery in 1802 and decided unanimously that slaveholders could not be members in good standing–that unrepentant slaveholders would be excommunicated!

Nonetheless, the Southern New School men saw the writing on the wall and decided to separate. And thus the division in 1857 of the New School Presbyterian Church over the issue of slavery, several years before the start of the Civil War. 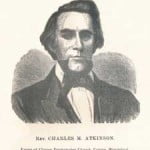 That’s quite enough history for now, don’t you think?

Words to Live By:
The nagging question remains: How could Christians in that era, Old School or New School, have supported an evil like slavery? The only thing I’ve really come up with thus far is that we are, all of us–Christians and non-Christians–far more blinded by our culture than we realize. Christians should find a way out of that cultural blindness, in that the Bible gives us a vantage point that rises above all cultures, all philosophies, all times and man-made religions. If we are truly and fully Biblical in our world-view, we should rise above, and stand against, the sins of our times. The nagging question remains, what sins are we blind to today? Or do we think we’re better than our forefathers in the faith?

For Further Study:
Harold M. Parker, Jr. wrote the book on this subject, titled The United Synod of the South: The Southern New School Presbyterian Church. The PCA Historical Center has preserved among its collections an original copy of the Minutes of the first meeting of the United Synod (1858), but I cannot locate a digitized version of these Minutes and our copy is too fragile for scanning. There is a digital copy of their later 1861 Minutes available, here.