A Man Fit for the Times
by Rev. David T. Myers 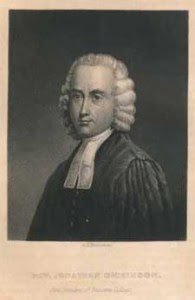 In 1722, with respect to the issue of creedal subscription, a schism began to develop in the infant Presbyterian church.  The question was simple.  Should a church officer — elder or deacon — be required to subscribe to everything in the Westminster Standards, or would it be sufficient for that officer to simply subscribe to the more basic truths of historic Christianity, as expressed, for instance, in the Nicene Creed?  Dickinson took the latter position and became the chief proponent of it in the infant church.  The fact that the same issue was raging in the mother countries among the immigrants from England, Scotland, and Ireland only heightened the controversy in the colonies.  Eventually, the approaching storm of schism was stopped by the Adopting Act of 1729.  Written by Jonathan Dickinson, it solidly placed the church as believing in the Scriptures of the Old and New Testaments as the only infallible rule of faith and life, while receiving and adopting the Confessional standards of the Westminster Assembly as subordinate standards of the church.  Each court of the latter, whether Session, Presbytery, Synod, and General Assembly would decide what exceptions to the latter would be allowed, and which exceptions would not be tolerated to the Westminster Standards.

In addition to his pastoral leadership in the church courts, the fourth college to be established in the colonies was the College of New Jersey in 1746.  It began in the manse of the first president, namely, Jonathan Dickinson.  The handful of students in what later on become Princeton Theological Seminary and Princeton University studied books which were a part of Dickinson’s pastoral library, and ate their meals with his family.  He would pass on to glory four months after the beginning of this school.

His last words were symbolic of his place in the history of the Presbyterian church.  He said, “Many years passed between God and my soul, in which I have solemnly dedicated myself to Him, and I trust what I have committed unto Him, He is able to keep until that day.”

Words to Live By:  Is this your testimony?  Paul writes in his last letter to the first century church, “. . . for I know whom I have believed, and am persuaded that He is able to keep that which I have committed unto him against that day.” (KJV – 2 Timothy 1:12)