Reproduced here are two accounts, the first an obituary, the second a reminiscence, on the death of the Rev. David Herron, who served some fifty years as a missionary to India, sent by the Reformed Presbyterian Church, General Synod. In 1833 the Reformed Presbyterians had suffered a split, dividing into the RP, General Synod and RP, Synod groups. Yet despite the grievous wound of a denominational split, both sides were aggressive in their missionary efforts, and just two years after that split, Rev. Herron was sent to India to begin a work there. The work begun there in Dehra Dun continued on after Herron’s death. He was succeeded by the Rev. John Calvin Taylor, then later by Rev. Frank Fiol, Mr. & Mrs. Gordon Taylor, and Mr. & Mrs. David Fiol. What an amazing legacy down through the years; what a wonderful testimony to the Lord God whom we serve!

MINUTE ON THE DEATH OF REV. DAVID HERRON. 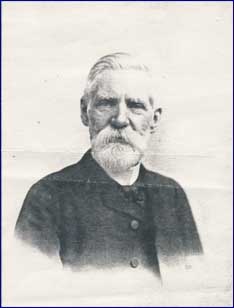 The committee to whom was referred the demise of Rev. David Herron, who died on the 29th of April, 1900, would submit to Synod the following minute. In the death of our esteemed brother for over fifty years a representative of General Synod, as a missionary in Northern India, our church has lost a man and minister eminent for missionary spirit, a high order of talent, Christian graces, and a temper and disposition which endeared him to all who knew him. His long service in missionary work in India, and his wide acquaintance with the needs and natives of India render his death an almost irreparable loss to our mission in the East.

At the meeting of General Synod held in Pittsburgh, 1835, a resolution was adopted that two of its members be selected for the foreign field. At that time Synod resorted to the ordinance of the lot, the result was that the lot fell on Rev. David Herron and Rev. Wm. Calderwood. The occasion was one of great solemnity and a farewell meeting of Synod was held.

These brethren proceeded to prepare for their departure to their distant field of labor. After reaching India our brother gave himself earnestly to the acquisition of the native language. At the same time he connected with the Saharanpur Presbytery. After missionating for a time in various parts of the Northwest provinces, he subsequently became principal of a female school in Dehra Doon. Here he became instrumental in training young women for varied work in India, some of whom became distinguished in literature and in medicine. Among these were two daughters of Rev. B.M. Bose, who now su
pport their father at Dehra Doon.

When the Saharanpur Presbytery was about to be dissolved by the Presbyterian Church, Rev. David Herron, in connection with Mr. Calderwood took means to preserve the integrity of the Presbytery and was eminently successful. And when after many years of separation, the reunion of the Saharanpur Presbytery with General Synod was proposed, our brother heartily seconded the proposition, and expressed himself by letter, as thankful to the church of his fathers and the church of his choice for their kindly continuing him as a member of the church after so many years of estrangement.

The last work of Mr. Herron’s life has been preaching to a regiment of English soldiers, together with aiding by sympathy and contributions an asylum for lepers.

He was a warm and genial friend, a successful missionary, able preacher of the Gospel, and a devoted Christian brother. The mission in India will deeply feel his loss. But he has gone to higher society. He sleeps in Jesus, and although his body lies in the grave, far distant from the sepulchres of his fathers, and we can see no more his genial face on earth, we hope to meet with him in the home above, where separation shall never enter. Meanwhile General Synod places on record this minute of appreciation of his life and labors.

The Rev. David Herron, who fell asleep in the Lord at Chakrata, India on the 29th of April, 1900, was intimately connected with the Saharanpur Presbytery almost from the time of its organization in 1837, and was its staunch supporter during the period of its greatest troubles; and it is not too much to say that had it not been for his strenuous exertions to maintain its integrity it would have been impossible for the Presbytery to continue in existence up to the present day. By his death not only has the Presbytery been bereft of a friend on whose wise counsel and unfailing support it could always depend, but the whole Church in India has been deprived of the benefits derivable from the presence among them of a venerable minister of mature experience, wide sympathies and burning zeal in the cause of Missions. He has however fought a good fight and has received a crown of glory at the hand of his Lord and Saviour, and although we deeply mourn his loss we bow in submission to the Will of our Heavenly Father whom it has pleased to take him away from us to a life of happiness above.

Pictured below, Rev. Herron with his children and an Indian servant. This photograph was taken in 1863 when Rev. Herron returned to the United States following the death of his wife, Mary Louise Browning Herron. 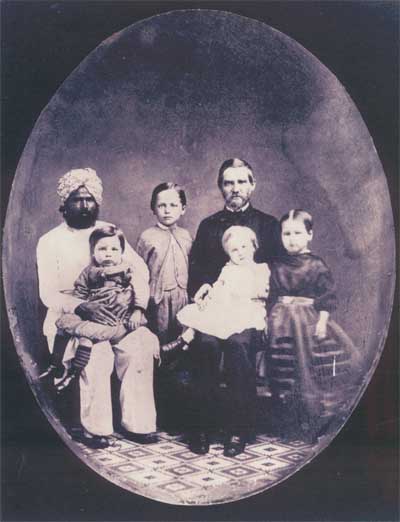