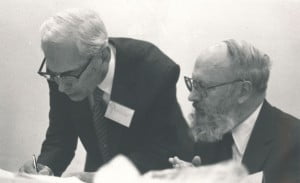 In June of 1980, at the Eighth General Assembly of the PCA, that body issued invitations to the aforementioned denominations to join the PCA.  The invitation was not to be a long courtship but rather a quick “tying of the knot” by simply merging into the PCA by a common commitment to the subordinate standards of the Westminster Assembly and the PCA’s Book of Church Order.

Within abut a year, t

he Reformed Presbyterian Church of North America withdrew from the discussions, citing their adherence to exclusive psalmody, along with some other considerations. The invitation to the Orthodox Presbyterian Church came up to a vote of presbyteries in both bodies. It failed by a narrow margin to arrive at the necessary vote by both assemblies, first by the PCA and then by the OPC.  Fraternal relations continue between both bodies.

For the remaining two denominations—the Presbyterian Church in America and the Reformed Presbyterian Church Evangelical Synod— joint General Assemblies were scheduled for their next national meetings at Calvin College, in Grand Rapids, Michigan.  In the pivotal vote of the RPCES on June 14, 1982, they accepted the union by a majority vote of 322 in favor to 90 against.

By this union, the PCA received 164 churches, 416 ministers, 20,615 communicant members, 6,139 covenant children, Covenant Theological Seminary, Covenant College, a direct line to the Scottish Covenanters from the Reformed Presbyterian Church branch of the former RPCES, and the God-given experience of  recognized theologians, teaching and ruling elders in both churches. Elected as moderator of the PCA General Assembly that year was former RPCES scholar and minister, Dr. R. Laird Harris, from Covenant Theological Seminary.

The “marriage” has lasted now 34 years (as of 2016), with continued prayers and work to make it a lifetime of married bliss.

Words to Live By:
Here is true biblical ecumenism. We ought to unite together on the basis of the Word of God and the Westminster Standards with all churches which have that common basis.  By it, the Church is strengthened to meet the secular challenges of the age in which we live; the divisive character of too many a religious body in the eyes of the watching world is removed, and God’s people are built up in the holy faith. Work where God has placed you to make this a reality more and more.