While in the mad rush to finish preparing for the PCA’s General Assembly, we take this opportunity to press the Rev. Dr. Miller into service as guest author for today’s post. The following is Dr. Miller’s reply to William Buell Sprague’s request for a biographical account of the Rev. Dr. John Ewing, who had long served as the Provost of the University of Pennsylvania. 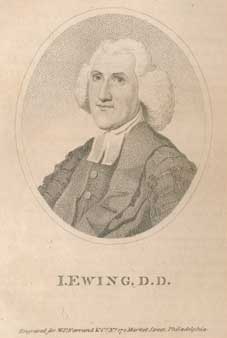 But the narrative which Dr. Ewing, after his return to America, was wont to give with most graphic interest, was that of his first interview with the celebrated Dr. [Samuel] Johnson, at the table of Mr. Dilly, the wealthy and hospitable Bookseller of London. Dr. Johnson, it is well known, was violent against the Colonies; had written a popular pamphlet against their claims [The Patriot,(1774)] ; and heaped upon them and their advocates the coarsest abuse. Mr. Dilly, in inviting Dr. Ewing to dinner, apprized him that Dr. Johnson was to be of the party, and cautioned him against contradicting or opposing the great literary despot. During the dinner the contest with America became the subject of animated conversation. Dr. Ewing, the only American present, being appealed to, began, with his usual frankness, to defend the Colonies. Dr. Johnson, looking at him with sternness, said, “What do you know, Sir, on that subject?” Dr. Ewing calmly replied that, having resided in America all his life, he thought himself qualified to form and to express opinions on the situation and claims of the country. Dr. Johnson’s feelings were roused. The epithets of rebels and scoundrels were pretty liberally applied to the population of the Colonies. At length Johnson rudely said, “Sir, what do you know in America? You never read. You have no books there.” “Pardon me, Sir,” replied Dr. Ewing, “we have read the Rambler.” [a periodical published by Dr. Johnson, 1750-1752]. This civility instantly pacified him; and, after the rest of the company had retired, he sat with Dr. Ewing until midnight, in amiable, eloquent, and highly interesting conversation.

Please note that some of Dr. Ewing’s sermons and other writings can now be easily accessed over at the Log College Press web site. Click here to access that page.