“To glorify God and to enjoy Him forever.” 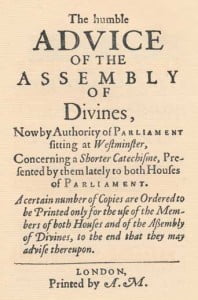 The Christian Faith According to the Shorter Catechism is the title of a small booklet published in 1950. Authored by Dr. William Childs Robinson, the work had first appeared in serial fashion on the pages of The Southern Presbyterian Journal. Reproduced here is Dr. Robinson’s short but eloquent introduction to his subject :—

The Shorter Catechism is the work of the Westminster Assembly of Divines which [initially] met at the call of Parliament in Westminster Abbey, London, on July 1, 1643, and continued in session for six years. The Assembly was composed of about a hundred and fifty English ministers and lay assessors and eight Scottish ministers and elders. They met to bring the worship, the doctrine, the government and the discipline of the Churches of Great Britain into closer conformity with the Word of God.

The Shorter Catechism is the final and finest work of that great Assembly. The work on the Catechism was undertaken early but in its final form was approved last. All the fine Lutheran and Reformed Catechisms from the days of the Reformation were at hand to draw upon. In the Assembly itself there were at least a dozen members who had written catechisms. Calvin’s Catechism, one by Herbert Palmer, a member of the Assembly, and a Manual by Archbishop Ussher influenced the work. In addition to Palmer, “the best catechist in England,” Dr. John Wallis, the mathematician, and Rev. Samuel Rutherford of Scotland seem to have shared in the preparation of this work. Our Shorter Catechism ranks with Luther’s Catechism and the Heidelberg Catechism and is described as “one of the three typical Catechisms of Protestantism which are likely to last to the end of time.”

The purpose of the authors of the Catechism was to frame the answer, not according to the model of the knowledge the child has, but according to what the child ought to have. Thus it is a pre-eminently instructive work. It places thoughts in the mind and heart of the child which grow with him, which indeed help the child to grow in wisdom and in grace. Thomas Carlyle, the great Scottish thinker, said: “The older I grow, and I now stand on the brink of eternity—the more comes back to me the first sentence in the Catechism which I learned when a child, and the fuller and deeper its meaning becomes: ‘What is the chief end of man? To glorify God and to enjoy Him forever.’ ”

Words to Live By:
But seek ye first the kingdom of God, and his righteousness; and all these things shall be added unto you.—Matthew 6:33, KJV.

Image source: Title page of a facsimile of the first edition of the Westminster Shorter Catechism, as ordered by the House of Commons on November 25th, 1647 to be printed for their use. This facsimile was published in London by the Publication office of the Presbyterian Church of England, in 1897. A copy of this work is preserved at the PCA Historical Center. To view this book online, click here.