Man Knows Not His Time

In The Daily Princetonian (Volume 38, no. 345, 27 January 1916), we read of the Rev. David R. Frazer, D.D., a graduate of the Princeton University, Class of 1861, who for many years was a trustee of Princeton University, that he had died very suddenly on Sunday, January 24, 1915, while visiting at the home of his son H.F. Spaulding Frazer, who was City Counsel for Newark, New Jersey, and a nationally known attorney. Following the funeral, the body of Rev. Frazer was buried in the Short Hills Cemetery.

Rev. David Ruddach Frazer, D.D., was born in Baltimore, Maryland on July 10, 1837, the son of William R. and Eliza J. (Armitage) Frazer. He attended the Central High School of Baltimore, Maryland and attended Delaware College before completing his college education at Princeton University in 1861. He then spent three years at the Union Theological Seminary in New York, where he was graduated in 1864. In the same year he returned to Princeton and received a Master of Arts Degree, and in 1865 was ordained to the Presbyterian ministry. Dr. Frazer was then made pastor of the First Presbyterian Church of Clifton, Staten Island, and held that position for two years, leaving it to preach at Hudson, New York. In 1872 he received a call to Buffalo, and was pastor of the Presbyterian Church of that city until 1880. He received a degree as Doctor of Divinity from Princeton in that year, and in 1887 was made a trustee of the University. 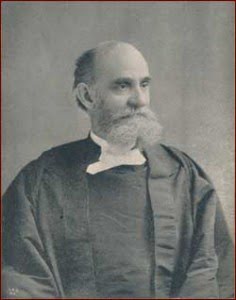 Three published works by Rev. Frazer were located, the first of which can be found in digital format:Dr. Frazer preached in Brooklyn for the next three years and then accepted a permanent position as pastor of the First Presbyterian Church of Newark, New Jersey, being installed there on February 21, 1883. The First Presbyterian Church was the oldest church in Newark, originally Congregational by affiliation, and changing over to Presbyterian in 1720. Rev. Frazer followed the pastorate of the Rev. Jonathan F. Stearns, and was succeeded, after a vacancy of nearly three years, by the Rev. William J. Dawson. During Rev. Frazer’s tenure at First Presbyterian, the church gave substantially to the cause of  missions and church extension (i.e., church planting). He also served as the president of a home for the aged and infirm. Rev. Frazer served the Newark church until 1909, preaching up until June of that year. Retiring from the active ministry in 1909, Dr. Frazer was very much interested in the Theological Seminary in Bloomfield, New Jersey, and for a time acted as president of that institution.

1891
“The Building of the Old Church,” Centennial sermon delivered at the dedication of the First Presbyterian Church, Newark, New Jersey, on the text of Isaiah 49:16.

From Rev. Frazer’s training and first several pastorates, we might have assumed he was of New School sympathies. Perhaps it is inappropriate to raise that question, given that most of his ministerial career occurred after 1869, when reunion of Old School and New School occurred. But given the question, some light may be shed by the memorial sermon that Rev. Frazer delivered on behalf of his predecessor at First Presbyterian, Newark—the Rev. Dr. Jonathan Stearns. Here the speaker, Rev. Frazer, undoubtedly emulates the object of his address:

“Dr. Stearns began his pastorate here at at time when the rival rallying cries of Old and New School were too well known and were too frequently heard in the Church. As the new Pastor was, in some points in sympathy with Old School views while the Church was in New School connection, considerable interest was felt, in some quarters, as to his probable course under these conditions. But both Old School and New soon learned that Dr. Stearns was no ecclesiastical partisan; that he was a peacemaker rather than a polemic; that his work was constructive, not destructive, hence he was peculiarly fitted to be one of the most influential actors in securing the reunion of the two bodies. Long before this topic became a theme of public discussion, he sought to rid the New School of certain ‘entangling alliances’ which brought that body into disrepute with the Old. He was influential in the establishment, and for many years was a member of the Home Mission Committee, helping, by his wise counsels, to shape that policy which saved to Presbyterianism many churches which otherwise would have sought a different ecclesiastical connection. His sermon on ‘Justification by Faith,’ preached before the Synod of New York and New Jersey, at Poughkeepsie, on October 25th, 1852, did much to allay the suspicions of the Old School body as to the theological soundness of the New. He was an influential member of the New School Committee on reunion and when the inner history of that movement shall be given to the world the record will show that no one man did more of the real, telling work which secured the desired result than did Dr. Stearns.