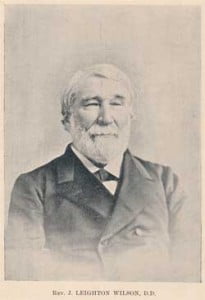 During the summer of 1833, he studied Arabic at Andover Seminary, Mass., and in the fall he sailed from Baltimore, Md., on a voyage of exploration to Western Africa, returning the following spring. As the result of his exploration, he decided on Cape Palmas, Western Africa, as the most promising place to begin his missionary work. In May, 1834, he was united in marriage to Miss Jane Elizabeth Bayard, of Savannah, Ga. In 1834, Mr. and Mrs. Wilson sailed for Cape Palmas, where they arrived at the close of the year. They remained at the Cape seven years. During these years, a church of forty members was organized, more than a hundred and eighty youths were educated, the Grebo language was reduced to writing, a grammar and dictionary of the language was published, the Gospels of Matthew and John were translated, and, with six or eight other small volumes, published in the native language.

In 1842, Mr. and Mrs. Wilson removed to the Gaboon River, 1,200 miles south of Cape Palmas, and commenced a new mission among the Mpongwe people. Here again the language was reduced to writing for the first time. A grammar, a vocabulary, portions of the Bible, and a number of small volumes, were published in the native language.

To view some of the published works of Rev. John Leighton Wilson, posted over at the Log College Press web site, click here.