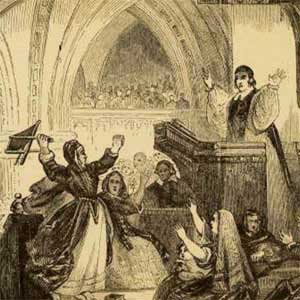 Drawing from three separate quotations, we have in short compass the story of Jenny Geddes and her little wooden stool, which God used to bring about a revolution and return to biblical truth.

Two years ago, while walking about in Old St. Giles’ church in Edinburgh, with Dr. W. G. Blaikie, whose fame as author, scholar, and preacher, is known throughout the Presbyterian Church, he said, ― this is the first time I have been here in seventeen years. And yet this is the church in which Knox preached and where Jennie Geddes worshiped. Here she threw the famous stool at the head of the Dean who was reading the liturgy, under orders from King Charles. The outburst of popular indignation, occasioned by this act, was the beginning of the great struggle for religious liberty in Scotland. 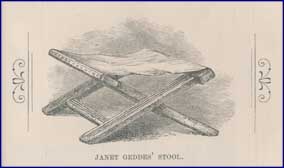 The war in behalf of purity in religion began in Scotland. Archbishop William Laud [1573-1645] prepared a new Prayer-book and sent it to Edinburgh for the use of the churches. On July 23, 1637, the priest of St. Giles Church came forth in white surplice to read the new ritual. Jennie Geddes flung her stool at his head, and a riot drove the minister from the chancel. All Scotland arose in arms against Laud’s innovations, and in 1638 the National Covenant was signed, binding the Scottish people to labor for the purity and liberty of the gospel. In the same year, at Glasgow, the General Assembly of the Church of Scotland deposed the bishops and re-established the Presbyterian system.

Two brief wars with Scotland were waged by King Charles, but the lack of money compelled him to summon the representatives of the people. The combatants stood face to face in the arena of debate. The issues of religious and of civil liberty were at length to be decided in a conflict between Charles Stuart and the English Parliament.

And in closing, we would direct your attention to a book that many might enjoy reading—Jenny Geddes, or, Presbyterianism and Its Great Conflict With Despostism (1869), by William Pratt Breed [1816-1889].