October 31: The Bride of the Reformation

You Have to Admit, She Chose Her Husbands Well.

The Bride of the Reformation
by Rev. David T. Myers 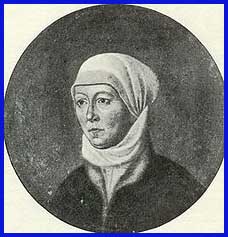 Her name was Wibrandis Rosenblatt.  Born in 1504 in Sackingen, Germany, she would marry four times, three of the four to leading Protestant reformers, with all  of them dying on her, until she herself eventually passed into eternity.  This led one writer to speak of her as “the bride of the Reformation,” which we have borrowed for our title.

We know next to nothing about her young years, her family, or her salvation.  But she must have had some early training which led her to the Savior, judging from her actions later on.  In 1524, she at the age of twenty, first married Ludwig Keller,  It was a short lived relationship as at age twenty-two, she became a widow, with a young daughter.
It was providential that with the rise of the Reformation, clerical marriage was becoming an allowed, even preferred status for pastors.  Among this new rising generation of Reformers was Johannes Oecolampadius.  It was pointed out to him that having a mate of like zeal was a glory to the Lord. So at the right time, the young widow Wilbrandis was pointed out to him, though he was 45 years of age. In God’s providence, the two were married in 1528, with three children quickly added to their union, for just a few years later, he would go home to glory, in 1531, leaving to her, among his other possessions, his books.
But God had had a greater care for Wibrandis; He had not forgotten her. In August 1532, she would again tie the proverbial knot and marry another Reformer, Wolfgang Capito, whose first wife had died. The new family was known for their hospitality to fellow Reformers and others. But a devastating plague came through the area and claimed both her husband and three of her children in 1541. Wibrandis and the remaining children continued, trusting the Lord for His provision. And Capito’s library went with his widow.
The last of the husbands was Martin Bucer, who was a Protestant pastor in Strassburg. From this union in 1542, they added two children to the family. Martin moved to England to teach and the family followed, as did the substantial library. Martin died in 1551, at which point Wibrandis, the rest of the family, and all those books moved back to Strasburg. It was there that she also died of the plague in 1564.
Even today, it is said that many descendants of this family still live in the Strassburg region. Where the books are is anybody’s guess.
Words to Live By:
Who dares to suggest that one must leave the home to be really a servant of God! There is a special reward in heaven for faithful wives and mothers who bear and serve Christ in the home.  Addressing the men of this website, take special care to speak highly of your wives and mothers who serve faithfully the family members under their care. You may lavish great attention on your libraries, but you know full well that your wife is the real treasure the Lord has entrusted to you.