He Was the First
by Rev. David T. Myers 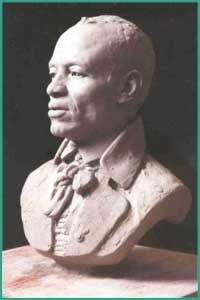 It was on this day, November 19, 1800 that John Chavis was licensed as a minister of the gospel by the Lexington, Virginia Presbytery. So what else is new, our readers might add? Many of our readers who are teaching elders have dates like this. But what makes this licensing special  is that John Chavis was an African American, as we would say today, indeed the first African American minister ordained in  the Presbyterian Church. As our title puts it, he was the first!

John Chavis was never a slave, but  from birth, a free black citizen. The dates for his birth are disputed, as is the place where he was born. Indeed, much of his early life is hidden from the researcher. But later on, his dates and events are well documented.

As a teenager, he joined the Fifth Virginia Regiment to fight in the American Revolution. He participated in six battles of that War of Independence –  at Trenton, Princeton, Brandywine, Germantown, and Monmouth – as well as in the Siege of Charlestown. Three years later, he was given an official dismissal stating that he had faithfully fulfilled his military duties and entitled to all recognition for having done so.

He became a tutor after his military service for Robert Greenwood’s orphan children, which gave him a taste for a calling which was to occupy his  life. Marrying Sarah Francis Anderson, who bore him one son in their married life, he moved his family to New Jersey, and particularly to Princeton, New Jersey, where he entered into a tutorial relationship with John Witherspoon, yes, that John Witherspoon, president of the College of New Jersey (later Princeton Seminary). At age 29, he was accepted into formal classes of this College. With the death of Witherspoon, he returned to Virginia to enroll at Liberty Hall University as the first black student in that Presbyterian college, as well as becoming the first black student to graduate from any college or university in the land.

This brings us up to his licensure in the Presbyterian Church to preach the gospel, which he entered into with slaves, free black citizens, and whites. Many a soul came to the gospel through his faithful ministry. Along with that ministry, he returned to teaching both white and black children in Raleigh, North Carolina, in a private school with a high reputation.

His vocal support for an abolitionist by the name of Nat Turner brought condemnation from many white people. Indeed, several Southern States passed laws after that failed rebellion of Turner that caused free blacks to lose their standing as citizens, including John Chavis. He couldn’t preach or teach any longer. But the Orange Presbytery, to which he had transferred. continued to support him financially to the tune of $50 per month. Also helping him and his family in financial ways after this time was a book which he published, entitled “An Essay on the Atonement” in 1833. Four years later, he published a paper on “The Doctrine of the Extent of the Atonement of Christ.” A secular writer termed it “a Calvinist pamphlet.” One year later, he would die on June 15, 1838. 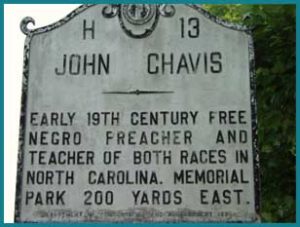 John Chavis is still remembered in Raleigh North Carolina by two road signs, the first ones to an African American in that southern city. Far greater honor has come to this African American for the work which he accomplished in difficult days for the Savior. Souls are in heaven due to his faithful preaching of the good news of eternal life. Remember dear reader, what we do for the Lord on this old earth may not translate out to temporal remembrance by the public. What we do however for our Savior has eternal rewards in heaven.