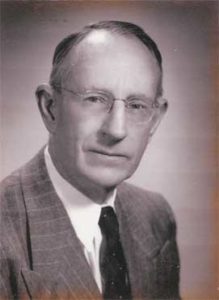 George and Ruth sailed for Chile in 1925 serving under the Board of Foreign Missions of the PCUSA.  They worked in the Central Valley in San Fernando and Rancagua before going to Linares, a provincial capital, named for the fine linen produced from flax.  It is the home of the Chilean Escuela Militar de Artilleria.  He established contact with the business, military and civic community as well as ministering to the spiritual needs of the working class.  His evangelistic service was through evangelistic tracts which elicited hundreds of questions from people with whom they came in contact.  Slowly but patiently a group formed, and El Divino Redentor church was born.

While renting facilities, the church began saving funds for a future building of their own.  As this fund grew, Gilchrist encouraged the folks to open a savings account with the Presbytery of Chile.  Legally, churches could not open accounts with a bank.  The Chile Presbytery, which was an extension of a presbytery in the USA, thus could not have an account in their name.  The same was true of the Chile Mission of the PCUSA.  So, they formed a national organization, the Union Evangelica whose charter stated that “it was created for the propagation of the Christian Reformed Church in Chile … which includes the different denominations in Chile.”  It thus served as the legal body representing the presbytery and the mission, the board included representatives from both mission and presbytery.   Eventually the church bought a property. George assured the church that their funds and property were in good hands, and he gave them his word that he would guarantee it.  Another missionary assured the congregation that the property “was in friendly hands.”