A Plea for Prayer
by Rev. David T. Myers

The member was desperate in his phone call to me. “Be quick,” he said to this young pastor in Edmonton, Canada, “I have three Jehovah’s Witnesses in my living room.” As I drove out to his house, I reminded myself to instruct this member in the text of Scripture (2 John 10) to not allow heresies into your house.

We’ve all had the experience of having members of this cult knock on our doors, looking to hand out their literature and wanting to discuss their views of this and that with us. How interesting then to learn that the man commonly called their founder—Charles Taze Russell [1852-1916]—was of Scots-Irish ancestry and was raised in a Presbyterian church! 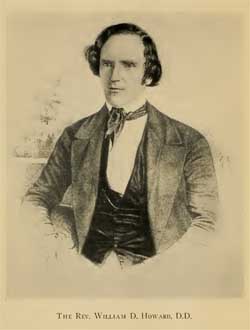 The time is the early eighteen hundreds in America. Charles Taze Russell was the second of five children of a Scots-Irish couple who was born in 1852. The Presbyterian family had moved to Pittsburgh and joined the Second Presbyterian Church, Old School of that city. Pastoring that influential church was the Rev. William Howard [pictured at left], who had himself been born in Philadelphia, Pa on July 28, 1814. From every indication we have, he was a faithful preacher of the gospel, confessional in his understanding of the Scriptures, and well liked by the congregation of the church, which sat under his preaching for a quarter of a century.

And it was into this congregation that the Scots-Irish family of the Russells came as members. Young Russell was to remain there until he was a young teenager, when he left the church to join the Congregational Church, and from there went on to begin his connection with what eventually became the Jehovah’s Witnesses cult.

Words to Live By: We can all look back on situations within the church and all to quickly point out sins of omission or commission, most often in others and not enough in ourselves. Was there such sins in Second Presbyterian Church, or with the faithful pastor of that time, which contributed to this young boy’s eventual apostasy? We don’t know the answer to that question. What we do know is that we need to be faithful to the Scriptures, the Reformed Faith, and the Great Commission in especially the young people of our congregations, in instructing them in Biblical truths, and especially living a holy life before them. And yes, with some of our youth, we have done the above, and they still become part of the world which is at enmity against Christ. Let us be faithful to our God and King, even King Jesus, and pray much for our covenant young children and young people. Let us be faithful to instruct them in the teachings of the Word of God and live a faithful life before them.