July 4: In Commemoration of American Independence 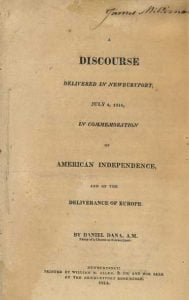 What is the only remedy for the sins and miseries of our restless world? It is the gospel.

The Rev. Daniel Dana labored as pastor in Newburyport, Massachusetts, serving two churches there, his tenure interrupted only by a brief year-long separation to serve as the president of Dartmouth College. Well-known in his day and well-spoken as a pastor and speaker, he was frequently called upon to bring addresses or sermons at various occasions throughout his career.

Today, we present a portion of an address brought by Rev. Dana on July 4th, in 1814. His sermon text was Revelation 15:3-4 — “Great and marvellous are thy works, Lord God Almighty; just and true are thy ways, thou King of saints. Who shall not fear thee, O Lord, and glorify thy name? for thou only art holy: for all nations shall come and worship before thee; for thy judgments are made manifest.“

An for the context of his sermon, it was on the occasion of a particularly troubling time in the young nation’s history. Commonly called the War of 1812, that conflict had been underway two year now when Rev. Daniel Dana was called upon to deliver a discourse in commemoration of American independence on July 4th, 1814. A gloom was over the nation, for Britain’s war with France has ended just months before, which meant the British could now deploy their army to North America. And so it was in those troubling times, with near certain defeat looming on the horizon, that Rev. Dana took up his text and began his address that day:

“Amid the fluctuations of human things, and the calamities which oppress our species, the contemplative mind is often perplexed, and the feeling heart ready to sink. But how consoling is the thought, that the Lord reigns! That same power, wisdom and love which made the world, are employed in its government; and that the final issue, even of the darkest dispensations will be bright and glorious! How animating the reflection, that in this tumultuous region, the Prince of Peace has erected his benign empire; and will extend it, until it shall embrace the whole family of man.

“Such are the reflections which this inspired passage awakens; and which, while they afford to the benevolent heart a constant feast, are calculated at once to enliven and to regulate our feelings, on this great occasion.

“The crisis at which we assemble, is of a peculiar character. It has much to animate. It has much to depress. Reflections crowd upon the mind in an overwhelming variety. Emotions spring up in the heart, too big for words to express, and almost too strong for nature to support. I feel, my respected hearers, that the task assigned me is impracticable. The sensations of the moment impel me to abandon it in despair. But the occasion has other claims; and I submit.

Though the day of our nation’s birth returns upon us shrouded in gloom, it is a day dear to the hearts of freemen. It calls us back to scenes on which memory loves to dwell. The fourth of July, 1776, constitutes a distinguished epoch in the annals, not only of our country, but of the world. The Revolution to which it gave birth, was in every view extraordinary. In the purity of its principles, in the grandeur of its design, in the magnitude and extent of its consequences, it stands unrivalled on the page of history.

Behold a youthful nation, bound to the parent state by the strong ties of interest and affection; submitting to maternal severity, until remonstrance is vain, and redress hopeless. See her at length casting off her allegiance, not in a delirium of rage, or despair, but under the tranquil conviction of duty, and with firm confidence in God. See her, for the pure love of liberty, meeting every form of danger, of privation and distress; see her rising stronger from defeat; drawing courage from the depths of despair; and finally reaching, through a sea of blood and suffering, the haven of independence and peace.

He must be an atheist, who in scenes like these, discerns not the finger of God. “No people,” said the Father of his country, “can be bound to acknowledge and adore the invisible hand which conducts the affairs of men, more than the people of the United States. Every step by which they have advanced to the character of an independent nation, seems to have been distinguished by some token of providential agency.”

Then, as we jump ahead to the end of the sermon, we see Rev. Dana’s concluding words:

“Further; let us learn the true source of national prosperity and happiness. Inspiration declares it in a word. Righteousness exalteth a nation. Another lesson, it is true, has been taught in Europe. Modern philosophy, trampling on this sacred maxim, and the book which contains it, undertook to diffuse happiness among the nations, and to regenerate the world, by a system of rank atheism. The experiment has been made. And now behold the result. Read it in that scene of blood, of devastation, of varied, accumulated misery, which Europe has exhibited for more than half an age. What loud and solemn warning is thus given to the world! And how emphatically is this warning addressed to us as a people! For we have but too readily caught the contagion of European infidelity and licentiousness. As a nation, we have forsaken the God of our fathers; and He has forsaken us. We have disobeyed his voice; and He has suffered us to walk in our own infatuated counsels. We have trampled on the holy maxims and precepts of his word; and we are now reaping the bitter fruits of transgression. My hearers, if there be any hope for our agonized and bleeding country, it must spring from repentance; deep, thorough, general repentance and reformation. Without this, peace itself, should it come to us, would scarcely be a blessing. Returning prosperity would but too probably harden us in sin, and precipitate us in the downward path of ruin. Oh, shall we not, as a people, humble ourselves under the mighty hand of God? Shall we not, while his judgments are made so manifest, come and worship before him, and glorify his name, and hallow his sabbaths, and keep his judgments, and his ordinances? Might but this be the issue of our calamities, our present despondency would vanish, and hope, like lightning in the gloom of midnight, would again cheer our disconsolate nation.

“To conclude: we may see what is the only remedy for the sins and miseries of our restless world. It is the gospel. It is real Christianity. The gospel while it reconciles man to God, sets him at peace with his brother man. It subdues those turbulent passions of the soul, whence wars and contentions arise. Thus it cuts off the streams, by drying up the fountain. It inspires the dispositions of kindness, compassion, forbearance, equity and universal love. Did it every where prevail, in its purity and power, the world would be in perfect peace. Mankind would constitute one affectionate, united, happy family. Earth would resemble heaven. How inspiring the thought, that such a delightful period is promised in the infallible Word; that it is hastening on; and that even the darkest, direst events that pain the heart, shall help to introduce it! O come, Lord Jesus, come quickly! Desire of Nations! Ascend thy universal throne! Sway thy resistless sceptre! Heal a bleeding world!

Words to Live By:
As we consider the frequent calls for revival in these days, and as we join in that prayer, the single greatest thing we can do to hasten that day of grace is to examine ourselves each one, and repent of our sins whatever they may be. Seek the Lord and do all His holy will. This is how we pave the way for a true refreshing of His Holy Spirit.

Righteousness exalteth a nation; but sin is a reproach to any people.–Proverbs 14:3.