Gunsmiths like Joseph Manton invented more reliable forms of ignition, like the tube lock in 1814. The artist Joshua Shaw designed what is recognized today as the percussion cap, which he patented in the United States in 1822, since Forsyth had threatened his rivals in Britain with legal action. These new forms of ignition proved popular among hunters during the Regency period, who had their old reliable flintlocks converted.[2]

He was educated at King’s College, Aberdeen, and succeeded his father as minister of Belhelvie in 1791.[3]

While hunting wild duck, he was dissatisfied with his flintlock fowling-piece due to its long lock time (the delay between the time the trigger is pulled and the time the main charge of gunpowder begins burning); by the time the pellets actually left the barrel, the target animal could hear the noise from the trigger being pulled and have time to either fly, dive, or run before the shot reached it.[2] He patented his scent-bottle lock in 1807; this was a small container filled with fulminate of mercury[4]

During the Napoleonic Wars Forsyth worked on his design at the Tower armories. But when a new Master General of Ordnance was appointed he was dismissed; other experiments had had destructive results and the new master general did not wish to see Britain’s mainarsenal destroyed.

Napoleon Bonaparte offered Forsyth a reward of £20,000 if he took his invention to France, but Forsyth declined. The French gunsmith Jean Lepage developed a similar form of ignition in 1807 based on Forsyth’s design, but this was not pursued.

Description: Engraved and Gold Inlaid Double Barrel Pellet Lock 16 Gauge Forsyth & Co. Style Shotgun Before the invention of the percussion cap in 1822, there was a variety of detonating material that was used. This example used a drum to dispense a single pellet, which was then detonated by the hammer. The lock plates were reengraved with “FORSYTH & Co/PATENT” and they feature scroll engraving at the rear and as stated are fitted with self primers ahead of the hammers. The scrollwork extends to the hammers. The twist barrels have a solid rib which has also been reengraved and gold inlaid with the name “FORSYTH & Co LONDON”. The rib is fitted with a silver blade front sight. Each barrel bolster has been reengraved, two inlaid gold bands one at the front and rear of each bolster. The trigger guard has a pineapple finial. The half stock has a checkered wrist, single barrel wedge, pineapple forend insert, silver thumb escutcheon, cheekpiece and flat buttplate. Length of pull is 13 7/8 inches. Alexander John Forsyth (1768-1843) was a Scottish Presbyterian clergyman who is best known for inventing the roller primer percussion system and manufactured hunting arms for nearly twenty years. The consignor notes indicate that this gun was purchased from the William G. Renwich Collection in 1974 and is considered a Forsyth fake using the very rare John Jones locks of which only ten have been recorded. A similar lock design and discussion on copies and fakes can be found in Early Percussion Firearms by Lewis Winant on page 62. A letter reproduced in Forsyth & Co.: Patent Gunmakers on page 198 notes “In this lock the hammer is clearly a copy of the early form of Forsyth, the only difference being the striker head which is formed with a hardened face…” Manufacturer: English Model: Side By Side BBL: 31 inch solid rib Stock: walnut Gauge: 16 Finish: brown/casehardened Grips: Serial Number: NSN Class: Antique Condition: Good as refinished, altered and embellished. The barrels retain 70% of the refurbished brown twist with a smooth gray patina on the balance. The action components retain traces of case colors. There is some minor pitting with extensive pitting on the trigger guard. The stock is very good with a number of minor handling marks, some chipping and some worn checkering. The engraved Forsyth name and gold inlays are nicely done; however they are not authentic to this shotgun. Mechanically fine. 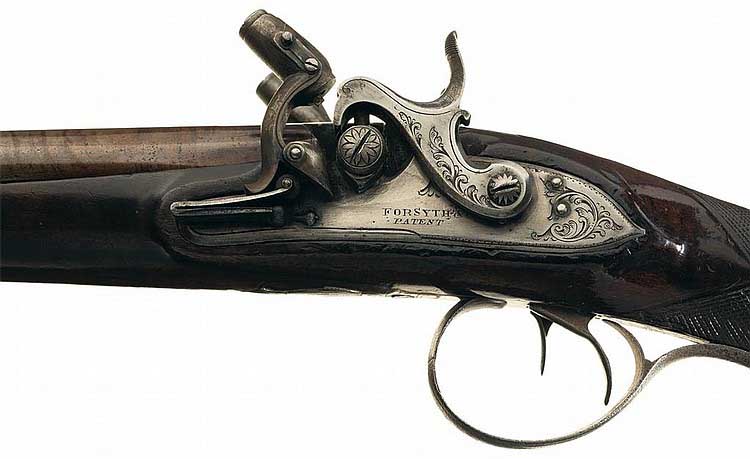