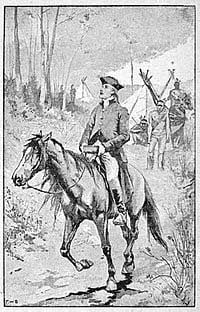 Our minds and hearts are drawn once again to one of the diary entries of David Brainerd, that man of God who, as a Presbyterian home missionary,  ministered to the native Americans in the mid-eighteenth century in our land.  Listen to his words penned on March 7, 1743:

“This morning when I arose, I found my heart go after God in longing desires of conformity to him, and in secret prayer found myself sweetly quickened and drawn out in praises to God for all he had done to and for me, and for my inward trials and distresses of late.  My heart ascribed glory, glory, glory to the blessed God and bid welcome to all inward distress again, if God saw meet to exercise me with it.  Time appeared but an inch long, and eternity at hand; and I thought I could in patience and cheerfulness bear anything for the cause of God, for I saw that a moment would bring me to a world of peace and blessedness.  My soul by the strength of the Lord, rose far above this lower world, and all the vain amusements and frightful disappointments of it.”

It is clear from reading this brief diary entree that Brainerd saw clearly that both delights and distresses came equally from God’s hand.   Regardless of which came his way, he was prepared to say, “Glory, glory, glory to the blessed God” for it.  And while this is hard to do, to praise God for dark providences, as one called it, yet it is biblical, to say the least.  “In everything give thanks,” the apostle Paul commanded in 1 Thessalonians 5:17.  It is primarily possible when, like David Brainerd, we find ourselves drawn irresistibly to God in adoration and obedience.  Thus we know that, being close to Him, He will give only that which is necessary for our souls to live closely to Him.

Words to Live By:  It is only by daily walking with God, as David Brainerd did during his short life, that we will be able to accept all what the Father has sent our way.  Question? Are you daily walking moment by moment with the Triune God?

Through the Standards: The Only Redeemer of God’s Elect, according to the Confession

WCF 8:1
“It pleased God, in His eternal purpose, to choose and ordain the Lord Jesus, His only begotten Son, to be the Mediator between God and man, the Prophet, Priest, and King, the Head and Savior of His Church, the Heir of all things, and Judge of the world: unto whom He did from all eternity give a people, to be His seed, and to be by Him in time redeemed, called, justified, sanctified, and glorified.”

WCF 8:2
“The Son of God, the second person of the Trinity, being very and eternal God, of one substance and equal with the Father, did, when the fulness of time was come, take upon Him man’s nature, with all the essential properties, and common infirmities thereof, yet without sin; being conceived by the power of the Holy Ghost, in the womb of the Virgin Mary, of her substance.  So that two whole, perfect, and distinct natures, the Godhead and manhood, were inseparably joined together in one person, without conversion, composition, or confusion.  Which person is very God, and very man, yet one Christ, the only Mediator between God and man.”

Remembering Our Fathers and Brothers :
The following PCA pastors entered their eternal rest on this day in—
1990 – William Donald McColley. Born in Tacoma, Washington in 1936, Rev. McColley graduated from Covenant Theological Seminary in 1961 and was ordained in the RPCES, ministering for four years with InterVarsity before becoming the organizing pastor of the Glenmore Presbyterian church in Calgary, Alberta. Honors included serving as vice Moderator of the RPCES Synod meeting in 1972. His longest pastorate was with the Bellewood church in Bellevue, WA, 1980-87 and at the time of his decease, he had been the pastor of the Covenant Evangelical Presbyterian church of Calgary, 1987-90.
1998 – Clyde Capehart Cobb. Born in 1941 and educated at Fuller Theological Seminary, he was both an educator and a pastor. Rev. Cobb was serving as the organizing pastor of the Grace Fellowship church in Kingston, Tennessee up until the time of his death.