September 19: The Standards of the Presbyterian Church

The Westminster Standards are the Standards of the Presbyterian Church

We have already considered the meeting which took place in Philadelphia, Pennsylvania which stopped an impending schism in the infant Presbyterian Church by The Adopting Act of 1729, as was presented on September 17. But there was another important commitment made by the infant church as part of this multi-day meeting on this day, September 19, 1729.  And it was the adoption by the presbyters of this American Presbyterian Church of the Westminster Standards (together, the Westminster Confession of Faith, the Larger Catechism and the Shorter Catechism) as their subordinate standard, behind that of Scripture itself, as their required standard for ordination. 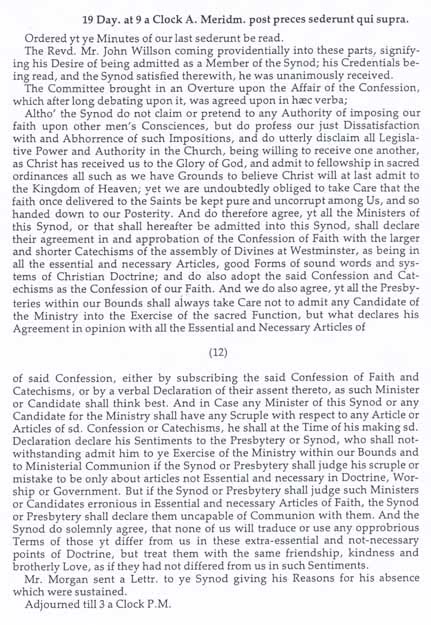 The exact words as taken from the Minutes of that Presbytery meeting in Philadelphia, Pennsylvania, were the following:  “we are undoubtedly obliged to take care that the faith once delivered to the saints be kept pure and uncorrupt among us, and so handed down to our posterity; and do therefore agree that all the ministers of this Synod, or that shall hereafter be admitted into this Synod, shall declare their agreement in, and approbation of, the Confession of Faith, with the Larger and Shorter Catechisms of the Assembly of Divines at Westminster, as being in all the essential and necessary articles, good forms of sound words and systems of Christian doctrine, and so also adopt the said Confession and Catechisms as the confession of our faith. And we do also agree, that all the Presbyteries within our bounds shall always take care not to admit any candidate of the ministry into the exercise of the sacred function but what declares his agreement in opinion with all the essential and necessary articles of said Confession, either by subscribing the said Confession of Faith and Catechisms, or by a verbal declaration of their assent thereto, as such minister or candidate shall think best.”

It might surprise our readers to think that a full twenty-two years after the first Presbytery in 1707, finally such a doctrinal commitment was made by the infant Presbyterian church.  But this is not to say that the ministers who made up this church did not automatically confess this subscription. Remember, the first page of the 1707 minutes were lost to history.  It well might have been part and parcel of that document.  Further, while not found in subsequent recorded minutes, all of the ministers had confessed their faith in the mother countries by subscription to the Westminster Standards. Up to this time in the colonies, their attention was taken up with church extension and government.  But finally, the historic creed which had fed the faith of the Presbyterian Church for three hundred years is made the foundation of the infant Presbyterian church in America.

Words to live by:  A historic document is made the subordinate standard of an infant church.  All ministers, past, present, and future, are to receive and adopt it before they can be ordained.  The young church is placed on a Reformed foundation.  While members must hold to a credible profession of faith, they know  that the preaching and teaching will be the depth and historical content of  the greatest theological statement ever produced by godly men. This is why we have included the Confession and catechisms in this historical devotional guide.  Read and ponder its words. Memorize its shorter catechism answers.  This writer has done so, and it has enabled him to stand in the test of perilous times.

Through the Standards:  The sixth petition of the Lord’s Prayer, according to the Shorter Catechism