He Seemed But a Little Boy 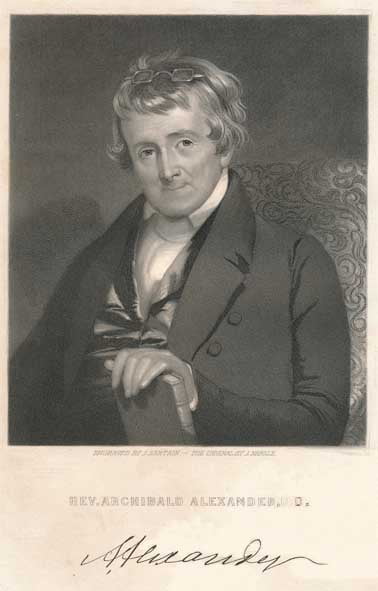 It was only a year before that Archibald Alexander had been taken under care of the Presbytery of Lexington, Virginia.  He was young and extremely small in stature.  In our day, such a move of spiritual oversight is usually granted by a Presbytery after it has heard your personal testimony, what God has done for you in Christ in your spiritual life, and an expression of your call to the ministry. In the eighteenth century however, it included all  that, no doubt, and also a sermon preached before the presbytery.

On that occasion in October of 1790, Archibald Alexander stood before the esteemed members of this presbytery. The fact that the candidate before him had utterly failed to utter anything approaching a sermon, much less give any orderly address, didn’t seem to faze him.  He stood up, without any idea of what he was going to say, and delivered an exhortation which astonished everyone present.  In fact, after that occasion, he delivered “exhortation” after “exhortation” several times a week.

In the spring of 1791, Alexander was examined by the Presbytery of Lexington in his Latin and Greek knowledge.  He had prepared an exegesis upon an assigned topic, and read it to the brethren.  He delivered a speech to the Presbytery as well.  It was then moved that he be assigned a text to preach at the next meeting of the Lexington Presbytery.

At that time, on September 20, 1791, the time had arrived for his proclamation before his elders, both in age and office, on the assigned theme, which was Jeremiah 1:7, “Say not, I am a child.”  And indeed, he seemed but a little boy, but the effect of his trial sermon, quickly put that to rest. There was authority in the proclamation of the Word of God.  It was no wonder then that at the next presbytery meeting in Winchester, he was licensed to preach the Word of God and the testimony of Jesus Christ.

Words to live by:  If you have an opportunity, attend a Presbytery meeting as a visitor soon, especially one in which a candidate is brought under care, or licensed for the gospel ministry, or ordained by one of our conservative presbyteries.  You will see the care which the church gives to its candidates, that they be sound in doctrine, proficient in the Westminster Standards, and practical in their understanding of their calling.  It will be a day well spent.

Through the Standards:  The postlude of the Lord’s Prayer, according to the Larger Catechism

WLC 196 — “What does the conclusion of the Lord’s Prayer teach us?
A.  The conclusion of the Lord’s prayer, (which is, For thine is the kingdom, and the power, and the glory, for ever. Amen.) teaches us to enforce our petitions with arguments, which are to be taken, not from any worthiness in ourselves, or in any other creature, but from God alone; and with our prayers to join praises, ascribing to God alone eternal sovereignty, omnipotency, and glorious excellency; in regard whereof,  as he is able and willing to help us, so we by faith are emboldened to plead with him that he would, and quietly to rely upon him, that he will fulfill our requests.  And, to testify this our desire and assurance, we say, Amen.”