A Martyr in His Missionary Zeal to Evangelize Blacks

We hear much in this twenty-first century about the treatment of blacks before the Civil War.  And the fact that slavery was even allowed in any of the parts of this blessed nation is to be abhorred.  But in the midst of this condition, there were  Southerners who sought to recognize the mission field to the blacks working on the plantations. 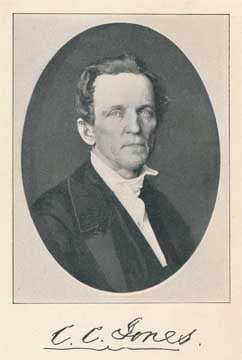 Beginning his special work as spiritual shepherd to the blacks of Liberty County, Georgia on December 2, 1832 was the Rev. Dr. Charles Colcock Jones, a member of the Midway Congregational Church.  Born on his father’s plantation in 1804, Charles Jones received his theological training under both Archibald Alexander and Samuel Miller at Princeton Seminary.  Though he began as a pastor in Savannah, he soon returned to minister to the blacks as far as their souls were concerned.  His congregation upon his start around the Midway Presbyterian Church some 4500 slaves. It was an organized ministry he had among them.

Three separate places of worship were built in convenient places solely for their use. Each Sabbath, Dr. Jones would travel by horseback to one of the three worship buildings.  First, a prayer meeting would ensue, led by chosen blacks themselves.  Then the sermon with hymns would be led and preached by Dr. Jones.  In the afternoon, a Sunday School with catechetical instruction was instituted. Following that was a personal inquiry regarding their spiritual condition. Then blacks chosen for their gifts would make reports to the pastor regarding the weekly spiritual conduct of the workers.  And finally, Dr. Jones would speak to the chosen leaders of their race regarding their encouragement and counsel.  During the week, other meetings would be held at the plantations themselves, with whites and blacks together listening to the proclaimed Word of God. 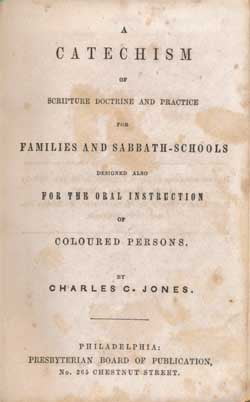 Concerned about this system, Dr. Jones wrote an exhortation which addressed this area.  The Presbyterian Synod of South Carolina and Georgia adopted it for their rules of all their churches and families in 1833. It stated: “Religion will tell the master that his servants are his fellow creatures, and that he has a Master in heaven to whom he shall give an account for his treatment of them. The master will be led to inquiries of this sort: In what kind of houses do I permit them to live?  What clothes do I give them to wear?  What food to eat? What privileges to enjoy? In what temper and manner and proportion to their crimes are they punished?”

With his health breaking from twenty-four, seven work on their behalf, Dr. Jones spent two years teaching Church History and Polity at Columbia Seminary.  But after that time, he returned to his spiritual work among the blacks for ten more years.  In 1863, he went to his heavenly home, where color lines do not count among the saints.

Words to live by:  Our Lord said once during His earthly ministry, “What will it profit a man if he should gain the whole world and lose his own soul?” (KJV – Mark 8:36)  The welfare of the soul comes first in the eyes of the consecrated Christian. Charles Jones recognized this.  And to that, even at the detriment of his own health, he worked himself to death on their behalf.  When the Christian church, even the Presbyterian church, is ready to do everything it can do to reach the souls of the people in the neighborhood of their congregations, then we will have that spiritual awakening which is so desperately needed in our blessed land.  O Lord, give us consecrated workers for the soul of America. 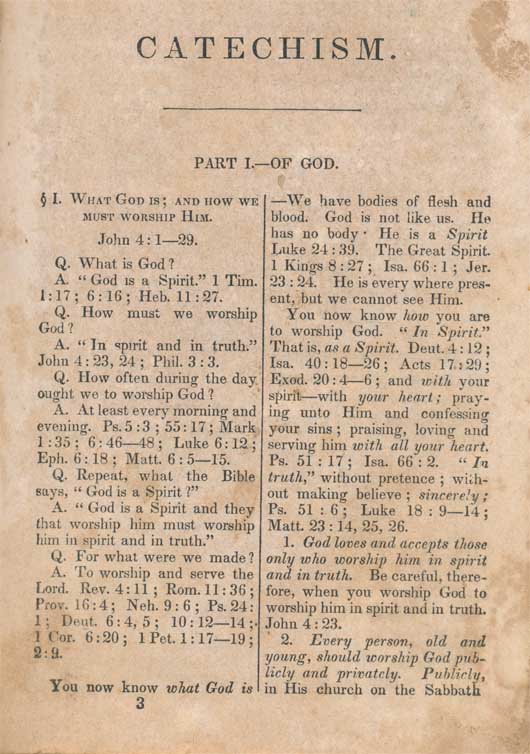 Through the Standards:  After we have partaken of the Lord’s Supper

Image sources :
1. Frontispiece portrait of Charles Colcock Jones, from Montevideo-Maybank, by R.Q. Mallard. Richmond, VA: Presbyterian Committee of Publication, 1898.
2. Title page to A Catechism of Scripture Doctrine and Practice for Families and Sabbath-Schools designed also for the Oral Instruction of Coloured Persons. Philadelphia: Presbyterian Board of Publication, 1852.
3. Page 25 from the above Catechism.
All scans prepared by the staff of the PCA Historical Center, working from copies of the above titles preserved at the Historical Center.