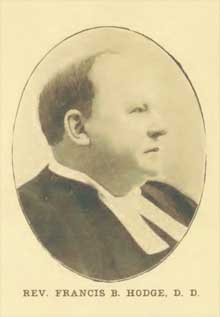 Francis Blanchard Hodge was the seventh child of Dr. Charles Hodge and his wife Sarah, and was born on October 24, 1838, the year after the schism of the Old and New School Presbyterians and a year before his father published the first volume of his Constitutional History of the Presbyterian Church in America. Frank, as he was called by family members, was named in memory of a favorite nephew of Dr. Hodge’s mother—Francis Blanchard, the son of Samuel Blanchard, of Wenham, Massachusetts. Among life’s tragedies, Francis suffered the death of his mother Sarah when he was just eleven years old. His father remarried when Francis was fourteen.

There in Wilkes-Barre he found new and admiring friends who were devoted to his ministry, his preaching, and his support. And there he remained as faithful pastor for the next thirty-five years, one of the longest pastorates in the history of that church. Under his leadership, the congregation grew significantly. Two-thirds of the annual church budget was allocated to benevolences. And a new modern building was constructed in the late 1880’s, and dedicated in 1894, free of any debt. Perhaps as an indication of how much he was devoted to the work of being a pastor, it does not appear that he authored any works for publication.