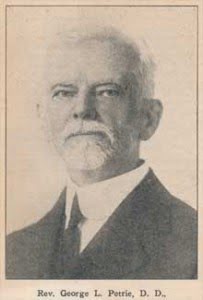 The Rev. George Holinshead Whitfield Petrie was born on May 5, 1812 and he died on May 8, 1885. Lacking a good substantive account about the Rev. G.H.L. Petrie, we will instead take the liberty of writing about his son for this day’s post.

George Laurens Petrie was born on February 25, 1840, when Andrew Jackson was the leading political figure in the nation. He was educated in classical preparatory schools, and later at Davidson College and Oglethorpe University. Finally, he took his preparation for the ministry at the Columbia Theological Seminary, graduating there in 1862. Our account states that during the Civil War, Petrie enlisted in the Confederate service as a missionary under the direction of the Presbyterian Church, doing work similar to that of the Y.M.C.A. during World War I. [You may remember that J. Gresham Machen served  with the Y.M.C.A. in France during WW1].  Petrie was soon asked by the Twenty-second regiment of Alabama volunteers to serve as their chaplain. Accepting this call, he was then regularly commissioned as a chaplain of the regiment.

Chaplain Petrie was also ordained to the ministry of the Gospel on the basis of his call to serve as regiment chaplain. Prior to that, he had standing only as a licentiate. In his capacity as chaplain, he served under General Joseph E. Johnston, and later under General J. B. Hood, and finally again under Gen. Johnston. During his time of service, he was in the battles of Resaca, New Hope church, Kennesaw Mountain, Bentonville and Kinston. He was also in the campaign that ended with the battle of Sumter, South Carolina, a battle which was fought after the surrender which officially ended the war.

After the war, Dr. Petrie taught a classical school in Montgomery, Alabama for two years, and served as professor of Latin at the Oakland College in Mississippi for another two years. He then filled pastorates in Greenville, Alabama and in Petersburg, Virginia, 1872-1878, before answering a call to serve as the pastor of the Presbyterian church of Charlottesville, Virginia. He then served as pastor of the Charlottesville church for fifty years, from 1878 to 1928, and was greatly loved by members of both the church and the community. It was noted in 1929 that of the eight hundred members of the Charlottesville congregation, Dr. Petrie had received all but fourteen of them into membership during his pastorate, and those fourteen were already there when he arrived in 1878.

In 1930, just a year before his death, Rev. Petrie was the oldest living alumnus of both Oglethorpe University and Columbia Theological Seminary. He had also been present as a visitor at the first General Assembly of the Southern Presbyterian Church, when it met in Augusta, Georgia, and in 1930 was the sole surviving attendant from that first Assembly. His notable career ended at the age of 91, when the Rev. Petrie died on March 27, 1931.

Words to Live By:
For the above sketch, one of our sources was The Christian Observer for May 21, 1930. Adjacent to the article about Rev. Petrie, there was another article titled “The Charlottesville Presbyterian Church and the University of Virginia,” written by the Rev. W. Kyle Smith, pastor for Presbyterian students at the University. This article began:—

The PCA has over the last several decades risen to meet this challenge with the formation of the Reformed University Fellowship. There are now over 120 colleges and universities with RUF chapters, each tied to a local PCA church. Now more than ever, these college and university campuses are strategic places where the Gospel of Jesus Christ must be faithfully proclaimed. Pray regularly for this ministry, and find out more about it by visiting the RUF web site.

For Further Study:
The Petrie Family Papers are preserved at Auburn University, as Record Group 192. Boxes 1-7 contain the papers of the Rev. George H.L. Petrie. Boxes 8-13 hold the papers of the Rev. George Laurens Petrie, and the remainder of the collection, Boxes 14-29 contains the Papers of George Petrie, son of George Laurens Petrie, who was himself a noted historian and educator. The finding aid for this collection can be viewed here.