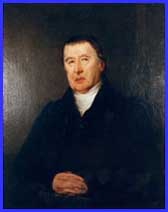 We could talk about the usual biographical information, like the fact that Ashbel Green was born on July 6, 1762, in Hanover, Morris county, New Jersey. Or that Green, at the urging of his mentor, Dr. John Witherspoon, accepted a call to serve as pastor of the Second Presbyterian Church of Philadelphia. Or we could even discuss how, by some accounts, it was Green’s motion at General Assembly that eventually led to the formation of the Princeton Theological Seminary.

But I think it is more telling of the character and worth of a pastor to hear just what sort of man he was. And who better to tell us that information than his close associate, the Rev. Jacob J. Janeway, who first served as his associate pastor and then remained a close friend until the day that Rev. Green died, on May 19, 1848. Dr. Janeway writes:—

“In imitation of his teacher, Dr. Witherspoon, for whom he always entertained a high veneration, he observed the first Monday of every month as a day of fasting, humiliation, and prayer. At what time he commenced this practice I do not know. The fact first came to my knowledge in 1802, when, during the prevalence of the yellow fever in Philadelphia, we were both staying at Mr. Ralston’s country seat, Mount Peace, from which we went on the Sabbath and preached to that portion of our people, who were willing to assemble in the church. He had, it is probable, commenced the habit years before; and I think he continued it till the close of his life.”

“Three times in the day, he retired to converse with his Heavenly Father, by prayer and supplication, thanksgiving and praise. His love for social prayer was manifested by his inviting his ministerial brethren to meet at his house every Monday morning for the purpose of reading the Scriptures, offering united prayer to God, and singing His praises.”

“His piety prompted him to acts of charity. He was ready, according to his ability, to relieve the needy, and aid in the accomplishment of all benevolent purposes. He settled in his mind what proportion of his income he ought to consecrate to benevolent purposes. One tenth he deemed the proper proportion for himself. On occasions he went beyond this rule. Warmly attached to the Theological Seminary at Princeton, and ardently desiring its enlargement and prosperity, he purchased and gave to the Trustees two acres of ground additional to what they held, for that valuable institution.”

Or for a different take on Dr. Green’s life and ministry, we might turn to an interesting volume, acquired last year by the Historical Center, namely Recollections of Useful Persons and Important Events, within Seventy Years, by the Rev. S.C. Jennings, D.D. [Vancefort, PA: J. Dillon & Son, 1884]. Rev. Jennings was a member of the Presbytery of Pittsburgh (PCUSA), and over the term of his long life apparently had opportunity to meet and get to know just about everybody in early nineteenth-century Presbyterianism. Here are his recollections regarding the Rev. Dr. Ashbel Green, the prominent Philadelphia pastor who was so instrumental in the establishment of the Princeton Theological Seminary:— 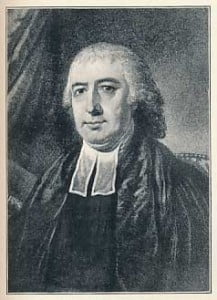 “Dr. Ashbel Green was chaplain to Congress during the Revolutionary war, and was once a pastor in Philadelphia. He was for a time President of Princeton College, New Jersey; which position he resigned, and was elected Moderator of the General Assembly in 1824, where I heard him deliver the opening sermon the next year with a good deal of vigor and oratorical power. He became the editor of the Christian Advocate, a sound, conservative monthly magazine, which had great influence in the Church, though the editor was not so severe in his condemnation of error as some when the troubles were brewing which divided the Presbyterian Church. He was paternal and mild. In person he was rather large, with full face and swarthy complexion, wearing his diminished hair (not entirely gray) somewhat long. Though I had often seen him at the Princeton Seminary, I found when in the Assembly with him in 1834, that he was enfeebled. He sat thoughtfully and moved his face as though he was chewing, and yet I believe he eschewed the vile stuff—tobacco.”

Words to LIve By:
A life of prayer. Every one of God’s dear children who have ever truly accomplished anything in His kingdom, are found to be those who placed a great emphasis on prayer and made a regular habit of it in their lives. A life of prayer exhibits, first and foremost, a dependence upon our heavenly Father.  Note the examples of the Psalmist, who rose early to pray (Ps. 5:3) and Jesus, who also rose early to pray (Mk. 1:35). Our time with the Lord in prayer should come first, because truly it is the most important thing we can do each day; because it orders and sets the tone for each day; and because, if delayed, it is all too quickly crowded out by both the regular and unexpected concerns the day may bring.