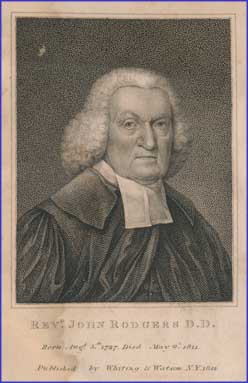 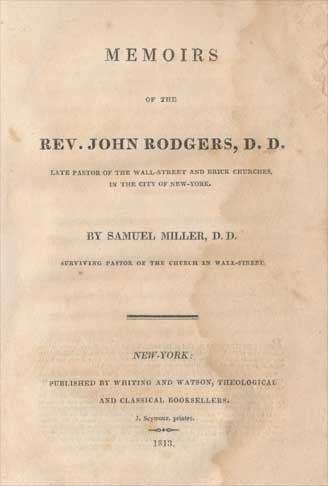 “One of the great charms of Dr. Rodgers’ character was the fervour and uniformity of his piety. It not only appears conspicuous in the pulpit,–dictating his choice of subjects, his mode of treating them, and his affectionate earnestness of manner; but it attended him wherever he went, and manifested itself in whatever he did. In the house of mourning it shone with distinguished lustre. Nor was this all. He probably never was known to enter a human dwelling for the purpose of paying an ordinary visit, without saying something before he left it to recommend the Saviour and his service. Seldom did he sit down at the convivial table, without dropping at least a few sentences adapted to promote the spiritual benefit of those around him…

Words to Live By:
Why should a pastor trouble himself to participate in the courts of the Church? It turns out that question is at least 175 years old, if not more. In 1836, one pastor put the question, seeing that it cost him about $50.00 to attend the meetings of Synod, and took three weeks away from his congregation. Keep in mind that $50 would have been at least two week’s wages for a pastor in 1836, perhaps more.] In reply, the editor of the Presbyterian newspaper offered six reasons as to why teaching and ruling elders should faithfully attend the courts of the Church:

1. Should every member of Synod conclude from similar premises that it was not his duty to attend, there would be no meeting at the time and place appointed, and of course no business done.

3. If the member can afford the expense it will be money well laid out, and if not, his people should aid him. The time occupied in going and returning, may often be profitably employed. The journey may be of advantage to his health. In conference with his brethren he may receive a new impulse in his Christian course, and be better prepared to labor with effect among his people on his return; so that neither he nor they will be losers by his absence.

6. The present crisis of the Church seems to demand more than ever a full attendance both of Ministers and Elders, cost what it may. [That statement, made in 1836, had the Old School/New School debate in view. But apart from that context, sadly, the statement seems to stand as a constant truth.]