An Assembly of Great Blessings 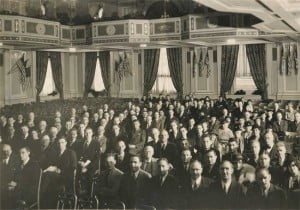 The first Moderator of the new denomination, J. Gresham Machen, preached from 2 Corinthians 5:14, 15.  The text reads, “for the love of Christ constraineth us; because we thus judge, that if one died for all, then were all dead: And that he died for all, that they which live should not henceforth live unto themselves, but unto him which died for them, and rose again.”  Speaking on the love of Christ being a constraining force, Dr. Machen, in a message not soon forgotten by those who heard him, stated that Christians should not live to themselves but live unto Christ.

Taking the position of Moderator was the Rev. J. Oliver Buswell, D.D., president of Wheaton College, Wheaton, Illinois.  He was to moderate the meeting in good fashion as a moderator should do, without fear of discipline or the ridicule of biblical positions.

This General Assembly adopted the Westminster Confession of Faith and Catechisms as they stood before the 1903 additions enacted by the P.C.U.S.A. general assemblies.  Thus the Presbyterian Church of America put itself on record as being a truly Reformed church.

Various reports came on this day and over the next two days, from committees set up by the previous Assembly in June of 1936. These included Home Missions and Church Extension, with report of 13 home missionaries already at work in the field.  Present among them was one home missionary to South Dakota, the Rev. David K. Myers, this writer’s father. The Committee on Foreign Missions also reported, encouraging support for the Independent Board for Presbyterian Foreign Missions. However, it also spoke about the establishment of an official  Board  of  Foreign  Missions  from the denomination at the next General Assembly.

Westminster Seminary was recommended to the pastors and congregations as worthy of their prayers and financial support. Held over to the next General Assembly was the adoption of a Form of Government, Book of Discipline, and Directory for Worship. The assembly was dissolved on Saturday evening, November 14, 1936

Words to live by:  This writer can read the minutes of the Second General Assembly, as he has a copy of them before him, but the spirit of the meeting was only to be enjoyed by those who were actually present.  It must have been a joyous meeting to realize that since just that previous June of 1936, the number of ministers had increased from 35 pastors to 107 ministers in the Presbyterian Church of America.  God was doing a great work in this spiritual successor to the Presbyterian Church, U.S.A.  Take time to look at your church choice, and if it is an Evangelical and Reformed Church, rejoice in what is happening in it as a sign of God’s blessings.  Indeed, support it with your tithes and offerings.  It probably is not perfect.  No church this side of glory is perfect. But if it is committed to the Scriptures, the Reformed faith, and the Great Commission, then give thanks for it, pray for it, and support it.