Day Two of their Second General Assembly The following materials are drawn from the scrapbooks gathered by the Rev. Henry G. Welbon. Initially organized as the Presbyterian Church of America, the denomination we now know as the Orthodox Presbyterian Church met in its second General Assembly, beginning on Thursday, November 12 and adjourned on Saturday, November 14, 1936. As the retiring moderator of the first Assembly, the Rev. J. Gresham Machen had opened the proceedings with a sermon on 2 Cor. 5:14-15, and the assembled delegates then celebrated the Lord’s Supper. The Rev. J. Oliver Buswell, Jr. and the Rev. J. Burton Thwing were nominated for Moderator of the Second General Assembly, and Rev. Buswell was elected to serve, the Rev. Cornelius Van Til and the Rev. Carl McIntire escorting Rev. Buswell to the platform. The election of Rev. Buswell as Moderator was, for one, seen as a way to minimize the possibility of friction over the issue of pre-millennialism, Buswell himself being a pre-millennialist. Ultimately that gambit did not succeed, and the young denomination suffered a split in 1938, with the formation of the overtly pre-millennial Bible Presbyterian Synod. 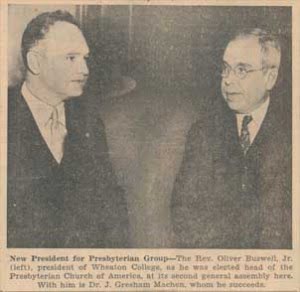 Caption for the news clipping photo at right: At the left is Dr. J. Oliver Buswell, Jr., president of Wheaton College, who was elected at the opening business session of the second General Assembly of the Presbyterian Church of America here yesterday. he succeeds Dr. J. Gresham Machen, of Philadelphia, show at the right, who was one of the leaders in the revolt of Fundamentalists from the Presbyterian Church in the U.S.A. The revolt let to the formation of the new church at the first General Assembly, June 11.

Presbyterian of America Goes on Record Against Interlocking Committees.

Resolutions placing the second General Assembly of the Presbyterian Church of America on record as against “interlocking committees and putting power into the hands of a few men” were adopted today. [i.e., Friday, Nov. 13th]

This action was taken at sessions in the Manufacturers and Bankers’ Club, Broad and Walnut Streets. The Rev. Martin Luther Thomas, of California, in proposing the resolution said such precautions would prevent the church being controlled by a few men at headquarters and guard against “maladministration.”

Members of the new denomination before its formation constantly asserted that the parent Church, the Presbyterian Church in the U.S.A., was controlled by an official clique.

Several commissioners opposed the resolution on the ground that it would create suspicion, but Mr. Thomas said: “It is better to avoid the abuse of power int he beginning than have trouble stemming it later.”

The resolutions were carried by a large majority.

Another resolution calling for a staggering of appointments to committees so as to prevent self-perpetuation of the governing heads, was defeated, when it was pointed out that the organizers of the new church should be given a free hand to carry out their work without interruption.

Wording of the actual resolution:  “In order to avoid interlocking committees, it is the desire of this General Assembly that no man be allowed to serve at the same time on more than one standing committee, board, or agency, except where an emergency exists.” [Minutes, pp. 12]

Words to Live By:
I recall that at a certain meeting of my presbytery, a candidate for the ministry was asked what he liked about the Presbyterian Church in America. With this candidate having grown up in an independent church fellowship, his reply shocked all of us elders at its first sound when he replied, “our Book of Church Order!” What we groaned at, with its very specific ways of doing things, was the very thing he rejoiced in, finding a supply of godly guidelines with which to “do church.” Elder representatives at the above described General Assembly of the Presbyterian Church of America wanted to profit from the past, especially even from the negative examples of those liberal churchmen and apostate churches where biblical input had been strangled in past PCUSA church assemblies. So important rules were added to the constitution of their newly formed church. Once adopted into practice, the more important outreach of the church could be accomplished with God’s blessing.