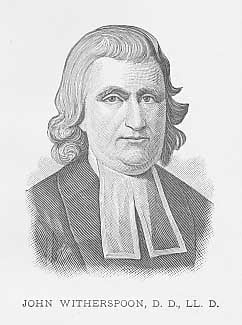 The timing is interesting.  Battles up north around Boston have already been fought.   In about three weeks, John Witherspoon will affix his signature to the Declaration of Independence.  As he enters the pulpit of the Presbyterian Church, he is going to speak on “The Dominion of Providence over the Passions of Men. A SERMON preached at Princeton, on the 17th of May, 1776 BEING the General Fast appointed by the CONGRESS through the UNITED COLONIES. To which is added, An Address to the Natives of Scotland residing in America.”  And you thought your pastor had long sermon titles!

Witherspoon in taking politics in the pulpit in essence is going to preach on God’s providence, how that God guides and governs and directs and controls all things, from the greatest to the least. He further uses the appointment of a fast from Congress to proclaim this message at this time. Let me quote one paragraph from it.

“You are all witnesses, that this is the first time of my introducing any political subject into the pulpit.  At this season, however, it is not only lawful, but necessary; and I willingly embrace the opportunity of declaring my opinion without any hesitation, that the cause in which America is now in arms, is the cause of justice, of liberty, and of human nature.  So far as we have hitherto proceeded, I am satisfied that the confederacy of the colonies, has not been the effect of pride, resentment, or sedition, but of a deep and general conviction, that our civil and religious liberties, and consequently, in a great measure, the temporal and eternal happiness of us and our posterity, depended on the issue. There is not a single instance in history, in which civil liberty was lost, and religious liberty preserved entire.  If, therefore, we yield up our temporal property, we at the same time deliver the conscience into bondage.”

With words like this, no wonder that a speaker in England’s Parliament declared that “Cousin American has run away with a Presbyterian parson.”  And that Presbyterian parson was none other than John Witherspoon. He closed his sermon with the following words, “God grant, that in America true religion and civil liberty may be inseparable, and that the unjust attempts to destroy the one, may, in the issue, tend to the support and establishment of both.”

Words to Live By:  We as American citizens have no right to pray for any kind of temporal prosperity without the necessity as Christian Americans to pray for spiritual revival in our blessed land.   The two ends must go together.