A third Reformation or a sinful schism? The power of the people in the pews or a decision by a wealthy member to choose an under shepherd for the church pulpit? The nation’s House of Lords in control or Presbyterian government? Evangelical party or moderate party? These were the questions which swirled around the Church of Scotland in the eighteenth and nineteenth centuries in the land of Knox.

Already divisions within the national church were producing separations of ministers and members.  In 1733, in what is known as the First Succession, a group led by the Rev. Ebenezer Erskine and others had separated from the Church of Scotland. It was followed by the Second Secession led by reformer Thomas Gillespie in 1761 into what was called the Relief Church. Both breakaways will have future posts in This Day in Presbyterian History.

One common issue in all these successions was an ancient tradition known as “patronage,” in which a wealthy individual in a church district had the authority to choose and install a pastor himself, despite what the people of that parish thought of the pastor. In 1834, the General Assembly would pass what was known as the Veto Act, which allowed for a majority of male heads of families to reject a patron’s sole choice of pastor. It was followed in 1842 by the General Assembly producing a Claim of Right, which stated that Jesus was the head of the church, not the government of Scotland. The latter responded by rejecting that action of the General Assembly. The background was set for a disruption in the Church of Scotland. 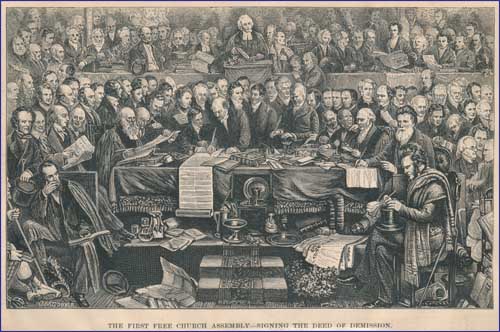 The First Free Church Assembly—Signing the Deed of Demission.

Since the Church of Scotland was financially supported by the government, the ministers and members who left were without salaries, pulpits, manses, and the people, their church buildings. It was very much a “let goods and kindred’s go” type of separation. To solve the immediate problem of finances, Moderator Chalmers instituted a plan for a penny a week from every member to help the new church and its ministers. From this modest beginning, other monies were raised from Scotland and churches overseas to support the need of its clergy and the buildings necessary for ministry.

Fast forward 85 years, after the Church of Scotland had dropped its link to the state and even the issue of patronage was resolved, the two churches re-united in 1929. Not every pastor and people rejoined however, as there continues to be a Free Church of Scotland in the nation.

Words to Live By: Fast forward another century in your mind, dear reader, to 2013, when the General Assembly voted to allow homosexual clergy within its ministerial ranks. It is obvious by this action that another Protestant Reformation is needed again.  Let  us pray to that end.