This year marks the 250th anniversary of the Bethel Presbyterian Church of Clover, South Carolina. Bethel was also one of the founding churches of the Presbyterian Church in America, and remains to this day one of the oldest constituted churches in the PCA, having been organized in 1764. An anniversary volume on the history of the church, edited by Helen Grant and Janice Currence, is available and may be ordered from the church. 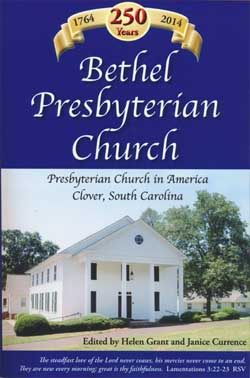 The Rev. George Gray McWhorter served Bethel from July 7, 1796 – September 29, 1801. Bethel had united with Beersheba Presbyterian Church in calling Rev. McWhorter and he served both congregations for the same period of time.

George Gray McWhorter was born in 1762.  One source states that his parents were possibly Jacob McWhorter and Elizabeth Gray McWhorter.  He was married to Eliza Drusilla Cooper  and they were the parents of eight children.  One child, James Miller McWhorter, died while Rev. McWhorter was the pastor at Bethel.  This child died January 15, 1800 at the age of 4 years 11 months and 1 day and is buried in Bethel Cemetery.

Little is known about Rev. McWhorter’s education except that he was trained for the ministry under Dr. James Hall.

After serving Bethel and Beersheba for five years, he resigned the charge in 1801, moved south, and served several different churches in South Carolina.  At a later period he moved to the state of Alabama.  Historical accounts state that in about 1823 Rev. McWhorter reorganized Lowndesboro Presbyterian Church, Lowndesboro, Alabama.  Then later about 1825 Rev. McWhorter became the first pastor of First Presbyterian Church, Montgomery, Alabama.

Rev. McWhorter was a Patriot in the Revolutionary War.  At the sight of his grave he has a DAR marker that reads:

In his fading days he remained strong in faith and hope.  Like most of God’s ministers he was poor.  Although destitute of the luxuries and almost all of the necessities of life, he continued to preach the gospel to the destitute with all the vigor of youth.

Rev. McWhorter died June 18, 1829 in Washington (Autauga County), Alabama.  He is buried beside his wife in Oakwood Cemetery, Montgomery, Alabama.  The inscription on his tombstone reads:

“He was a Patriot and soldier in the Revolutionary War . . . Sacred to the memory of Rev. George Gray McWhorter – he was a minister of the Gospel of the Presbyterian order forty years . . . Blessed are the dead who died in the Lord . .  Let angels trim their lamps and watch his sleeping clay till the last trumpet bid him rise to bright celestial day . . . Also, Mrs. Eliza McWhorter . . . Born February 4, 1769 . . . Died February 3, 1810”