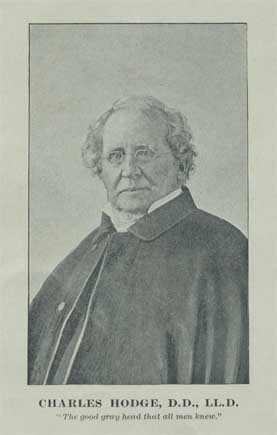 Early in July of 1878, on the pages of The Christian Observer,this brief note appeared under the title, “Calvinism and Piety,” :

“Dr. Hodge, who was the foremost of the old Calvinists in this country, was, in character, one of the sweetest, gentlest and most lovable of men. His face was itself a benediction. We doubt whether he had any other than a theological enemy in the world. Curiously too, the peculiar tenets of his theology were reserved for the class-room and for philosophical writings. In the pulpit he preached a simple and unsectarian gospel; his favorite texts were such as “Believe on the Lord Jesus Christ and thou shalt be saved;” and his sermons were such as the most successful missionaries delight to preach in foreign lands. In Princeton he is regarded as without peer in the conduct of the prayer meeting. His piety was as deep and as genuine as his learning was varied and profound. The system of theology of which he was the ablest American representative seems to us, in some points, foreign to the teaching of the New Testament, but the life and personality of the man were luminous with the spirit of an indwelling Christ.”