Those Quiet Ones Will Surprise You. 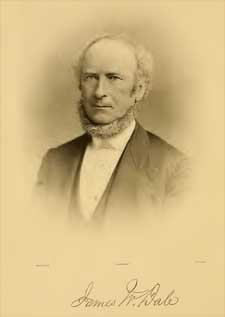 Pastors and some others who read this blog may well have studied the work of the Rev. Dr. James W. Dale, on the subject of baptism. But who was this nineteenth-century author? Rev. James Roberts, author of a Memorial composed in memory of Dr. Dale, writes concerning his subject:

“…the story of such a life can never grow old, and can never cease to be instructive and helpful to others.

Yet Roberts also notes that “The written records from which to construct an adequate memorial [were] almost totally lacking. No diary was kept. No memoranda of personal experience remained. Only occasional dates of events, and a few letters to his family and friends, had been casually preserved.”

“Dr. Dale was a very reticent man and seldom spoke of himself or his personal affairs, except to his most intimate friends, and even to them with a lingering flavor of reserve. For instance, he carried on his remarkable researches on the subject of baptism, by day and by night, for twenty long years, without ever saying to a human being that he was making a book, until he had gone over the whole ground of the inquiry, and his first volume was ready for the press.”

James Wilkinson Dale was born October 16, 1812, at Cantwell’s Bridge (now Odessa) Delaware. He was the third son and the fourth child of Richard Colgate Dale, M.D. and Margaret (Fitzgerald) Dale. Following a term studying law, he turned to prepare for the ministry, initially at the Andover Theological Seminary. From his second year on, he continued his studies at Princeton, graduating there in 1835. He was appointed by the American Board to serve as a missionary in India, but could not gather the requisite financial support and had to withdraw. Undeterred, he next entered upon medical studies to further prepare for missions work, but upon graduation in 1838, entered into a term of service as an agent for the American Bible Society, 1838-1845. He later served as pastor of several churches near Philadelphia. It was during the time of these several pastorates that he wrote his famous works on the subject of baptism. 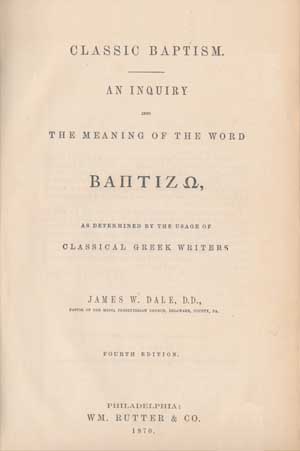 As these volumes were issued, one after another, from the press, they were noticed at considerable length in the editorial columns of many of the religious papers of the country. The foremost professors, pastors, teachers and preachers were strong in their commendation of the author and of the work which he had so well accomplished. Each volume as it came out increased, rather than diminished, the admiration of scholars for the author, and added fresh laurels

The publication of these scholarly volumes at once lifted their author out of the comparative obscurity in which he had lived. His company, his counsel, and his acquaintance, were sought by men eminent in the theological world, who had never seen or even heard of him before the appearance of his books. Other writers in the same field began to quote him as authority, and his works remain and authority on the subject to this day.

In recognition of his scholarship and of his ability as an author, Hampden Sidney College, in Virginia, conferred upon him the degree of Doctor of Divinity, as did also his alma mater, the University of Pennsylvania.

Dr. Dale received no profit from the sale of his books. Perhaps that is not unusual in itself, but he certainly did not publish with an intent to profit from them. In his retirement, he kept busy in part by working to condense and popularize his works on baptism. One friend expressed the wish that “out of this forest of philological learning [speaking of Dr. Dale’s prior works on baptism], there might be, in due time, a little grove selected for the security and comfort of the unlettered believer.” It was the intention of Dr. Dale to make such “a little grove,” in other words, to write a book on baptism which all Christian people could read with interest, pleasure and profit. He found that the books which he had already written and published could not well be abridged or condensed, without lessening their value to preachers and to theological students, for whom they were especially written. He, therefore, determined to prepare such a popular presentation of the subject as would put the valuable results of his studies within the reach of the masses of God’s people. This was the task which he had set for himself, and on which he was engaged when the Master called him to lay aside his pen and to enter upon his everlasting reward.

Words to Live By:
Most people, Christians included, live out their lives in relative obscurity. Few people, Christians included, achieve notoriety in any field. But every Christian has something of great worth that the world knows not. Regardless of our calling in life, we know that we have a purpose. We know that we serve the King of kings. And we know that God has declared that He will be our God, and we will be His people.

“For we are his workmanship, created in Christ Jesus unto good works, which God hath before ordained that we should walk in them.” (Ephesians 2:10, KJV