You Could Not Sit Under His Ministry Unaffected 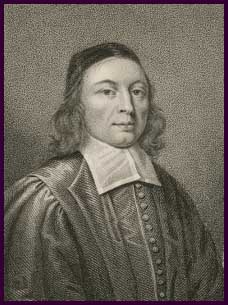 Our title characterizes John Flavel (sometimes spelled Flavell). Born in 1628 in Bromsgrove, Worchestershire, he was a pastor’s son. His father educated him in biblical truths which stood him in good stead when he studied at University College, Oxford.  Ordained on October 17, 1650 by the Presbytery of Salisbury, he accepted a call six years later to the seacoast town of Dartmouth, where through his reading and close meditation upon the text of the Scriptures, self-examination, and prayer, his pastorate began to have a spiritual effect upon the people.

One of this flock wrote of him, “I could say much, though not enough of the excellency of his preaching, of his seasonable, suitable, and spiritual matter; of his plain expositions of Scripture, his talking method; his genuine and natural deductions, his convincing arguments, his clear and powerful demonstrations, his heart-searching applications, and his comfortable supports to those that were afflicted in conscience.  In short, that person must have a very soft head, or a very hard heart, or both, that could sit under his ministry unaffected.” (Erasmus Middleton, Evangelical Biography, 4:50 – 51). What a remarkable commendation of a man of God in any age, and one to be emulated by those called to the ministry of the Word among our readers.

Flavel was one of the 2000 plus ministers ejected from Anglican pulpits and parishes in 1662, but he didn’t stop ministering to his people by that act. He met them in homes, in secret places in the forest, really anywhere to continue his ministry of the Word.  Constantly under threat of arrest and imprisonment, more than once soldiers of the realm would interrupt the precious hours of prayer, the Lord’s Supper, and the preaching of the Word. Once, the only place of worship was an island, which at a certain hour of the day, would be submerged by high tide. Congregants hungry for the Word of God as preached by Flavel would keep their boats handy so as to jump into them at the last moment!

Taking two indulgences offered by King Charles II and King James, Flavel would part company with the Covenanter Presbyterians by accepting these opportunities to proclaim the unsearchable riches of God’s grace further. He continued that spoken ministry accompanied by the writing of numerous books, works which continue to minister today in both print and electronic editions. This author has had in his ministerial library during his forty years in the pulpit, the six volume “Works of John Flavel,” which includes an exposition of the Westminster Shorter Catechisms. If you have not read any of Flavel’s works, you are missing a great treasure.

He departed this life in 1691. However, being dead, he continues to speak through his writing to countless churchmen and lay people today.

Words to Live By:
It was said of John Flavel that “He preached what he felt, and what he had handled, what he has seen and tasted of the Word of life, and they (his listeners) felt it also.”  Speaking to the readers of these posts, how faithful are you to pray for, encourage by your attendance and notes, those who minister to you the word of God?  Scripture says in Hebrews 13:7, “remember those who led you, who spoke the word of God to you, and considering the results of the conduct, imitate their faith.”

A few small samples of Flavel’s writing, first on the glories of Christ Jesus, then second on discerning divine providence:

“The whole world is not a theater large enough to display the glory of Christ upon or unfold even half of the unsearchable riches that lie hidden in Him. And such is the deliciousness of this subject, Christ, that were there ten thousand volumes written upon it, they would never become tiring to the heart. We used to say that any one thing can finally tire us and this is true, except about this one eminent thing, Christ, and then one can never tire, for such is the variety of sweetness in Christ.”

“Search backward into all the performances of Providence throughout your lives. So did Asaph: ‘I will remember the works of the LORD: surely I will remember thy wonders of old. I will meditate also of all thy work, and talk of thy doings’ (Psalm 77:11, 12). He laboured to recover and revive the ancient providences of God’s mercies many years past, and suck a fresh sweetness out of them by new reviews of them. Ah, sirs, let me tell you, there is not such a pleasant history for you to read in all the world as the history of your own lives, if you would but sit down and record from the beginning hitherto what God has been to you, and done for you; what signal manifestations and outbreakings of His mercy, faithfulness and love there have been in all the conditions you have passed through. If your hearts do not melt before you have gone half through that history, they are hard hearts indeed. ‘My Father, thou art the guide of my youth’ (Jeremiah 3:4)”.—From The Mystery of Providence, chapter nine.