Smectymnuus! What? Who? What rational parent would give his kid this confusing name? Yet it wasn’t a birth name. It was rather the nom de plume framed by the initials of five authors to a book against episcopacy in seventeenth century England. To be exact, this was 1641 and the book itself had a title which may well be one of the longest titles in existence, ever!  It was “An Answer to a Book entitled, An Humble Remonstrance in which, the original of Liturgy and Episcopacy is discussed: and Queries proposed concerned both. The Parity of Bishops and Presbyters in Scripture demonstrated.  The Occasion of their Imparity in Antiquity discovered. The Disparity of the Ancient and our modern Bishops manifested. The Antiquity of Ruling Elders in the Church vindicated. The Prelatical church bounded.” It would seem to this writer that the outline of the book was put into the title thereof!  Oh yes, and it written by Smectymnuus or S(tephen) M(arshall), E(dmund) C(alamy), T(homas) Y(young), M(atthew) N(ewcommen), and W(illiam–rendered as “UU“) S(purstow). 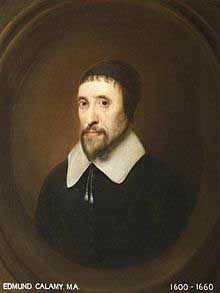 Our attention  today in Presbyterian History is on the “E” and the “C” of the title, or on Edmund Calamy, known as Calamy the Elder. Born in London, England, in February 1600, day unknown, he was educated at Pembroke Hall, Cambridge. England.  He pastored and lectured at three Anglican churches from 1626 to 1639 when he was chosen to serve as the pastor of the London church of St.Mary Aaldermanbury.  In most of these parishes, he conformed to some of the ceremonies of the Anglican tradition, like bowing when the name of Jesus was mentioned, but resisting other practices of the Anglican liturgy.  Indeed, he was a Presbyterian delegate at the Savoy Conferences between April and July in 1661, attempting to find some compromise in the liturgy of the Anglican Church.  He, along with the other authors of the above title, were members of the Westminster Assembly of Divines from 1643 onward.  With the passing of the  Uniformity Act of King Charles II, the Rev. Edward Calamy was one of 2400 Presbyterians and Puritans who were ejected from his pulpit.   He preached his farewell sermon to his congregation at St. Mary’s on August 17, 1662.

Calamy continued to worship at the services of his old church. Once the appointed preacher did not attend the worship service, he was prevailed upon by his old congregation, and so took the pulpit and preached “with some warmth,” it was reported. Arrested for disobeying the Uniformity act, he was imprisoned for a time on January 6, 1663. He was freed later by the king and closed out his public ministry.

He survived to witness the terrible fire of London in 1666, which catastrophe contributed to his death when he saw his last congregation in ruins from the fire. He died on this day, October 29, 1666, and was buried in the ruins of the church as close as his mourners could guess was the place of the pulpit.

Words to Live By:
Where there had been earlier compromises of Presbyterian principles in his early life and ministry, he ended well with a firm commitment to Presbyterian principles and practice. Let that be our resolve as Christians, that we will end well in commitment to Biblical principles and practices. As Scottish pastor John Livingstone put it: “Let God be your only rule; Christ your own hope; The Holy Spirit your only guide, the Glory of God your only end.”